Home Lightbox No Other Options 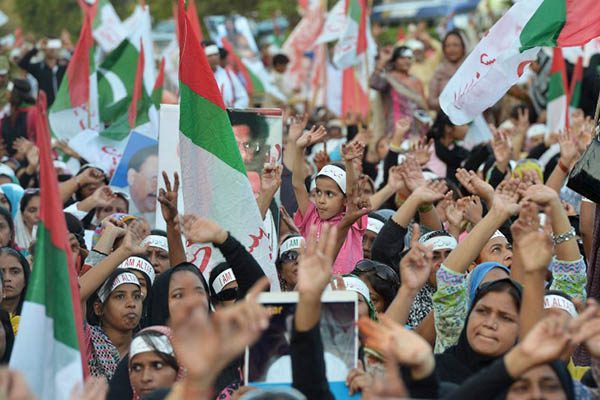 The logic behind the MQM’s supplication.

It happened on my TV show a few months ago. A Mutahidda Qaumi Movement member of the National Assembly, when pressed on the question of party workers going to India and training for subversive activities, conceded that workers had gone to India in the wake of the June 1992 operation. Many from the MQM had fled then, seeking asylum in other countries. But he denied that any of those workers had been recruited by the Indian intelligence agency R&AW [Research and Analysis Wing].

His argument was that mohajirs in Pakistan have family ties in India and it was natural for many to have gone there. In a statement by the party’s Coordination Committee, posted on the MQM’s website on Sept. 20, a similar argument is mounted: “These MQM workers chose to go to India because they had family ties in India, and they thought that they will not face hardships of homelessness and hunger.”

However, neither the MQM MNA on my program nor the Coordination Committee’s statement explains how a presumably large number of party workers got Indian visas (remember: it is 1992) for long stays, given the difficulty of travel between the two countries.

Meanwhile, evidence of MQM workers’ recruitment and training by R&AW has been mounting. To be fair to intelligence agencies, the evidence goes back to the 1990s. But it is only now, with the Rangers’ operation proceeding apace, that pieces are being put together for a fuller picture and political expediencies are set aside for a cleansing process.

It is precisely for this reason that the MQM Coordination Committee, after conceding that its workers went to India, has also admitted, though circuitously, that some of them might have been trained by R&AW: “These [sic] workers who had gone to India for saving their lives did so without informing the MQM, and this cannot be called the policy of the MQM. The MQM has nothing to do with the training of these people [sic] who had gone to India.”

What is unclear and has been left unsaid by the MQM is the question of why some of its workers needed to leave “for saving their lives.” What were they afraid of? Did they belong to the cadre that has always constituted the musty underbelly of the party? And while, incredibly, they might have kept the party in the dark about their comings and goings, is it only now that the party has realized that these workers were in contact with a hostile foreign intelligence agency? Further, did the MQM publicly dissociate itself from those workers who it now implicitly accepts were trained in India?

So, what has made the MQM supplicate to the ‘establishment’, even as it has tried to distance itself from the accusation of its workers being trained for subversion?

By all information, the noose is tightening with arrests and confessions of many of the MQM’s underground. The party, which has been playing the victim card since the beginning of the operation in Karachi, alternately blowing hot and cold, realizes that there’s not much wiggle room left. The strategy must be changed from crying foul to offering a cautious mea culpa.

Read these lines: “The Co-ordination Committee appealed the establishment to review everything in the light of facts by casting aside emotions and use of force as it would be in the larger interest of the country.

“Just as clemency is being announced for the estranged Baloch people who are highly praiseworthy, the establishment should also heal the wounds of Muhajirs by forgetting past bitterness.

“The Co-ordination Committee said that such a step would be in the interest of the nation and the country, and the MQM will extend its fullest support to it.” [emphasis added]

Paraphrased, it means that the party knows it can—and has been—nailed on the huge problem of its cadres trained for terrorist acts by R&AW and that is not an issue it can cloud through dissembling and what-aboutery. The strategy: accept it implicitly, distance from such elements, appeal to the establishment for clemency (note the reference to Baloch groups) and indicate that if the establishment took the clemency route, the party will fully cooperate with it.

It’s not a bad strategy, actually because, frankly, there’s not much else left to do. The MQM does command a large, though depleting, vote-bank in urban Sindh. That’s the Dr. Henry Jekyll side of the party. The problem is the Edward Hyde side of the MQM. The ‘establishment’, more appropriately the government, can and must live with Dr. Jekyll because he represents the political expression of the ‘mohajir’ community.

But here’s the problem: so far, the two sides of the party have remained linked. In fact, many of the more vocal critics have long contended that Dr. Jekyll’s successes are, to a large extent, owed to the fear that Edward Hyde instills among people. My own sense is that this is only partially true and to the extent that the fear factor prevents those who want to exit from leaving in favor of other political options.

The system is locked because there’s no possibility of ‘voice’ in it, as is obvious from the absolutely bizarre shows of loyalty and obsequiousness that we see on display for Altaf Hussain.

The question then is, and it’s a question the party’s saner leaders will need to answer sooner than later: if they really want the government to offer clemency and if the party will fully support that move, who should the government be talking to? The collegium of the Coordination Committee or the man in Edgware?

So far, the party hasn’t worked out a solution to that. Publicly, no MQM leader would dare voice what has come to be known as the Minus-One Formula. That is because, as intelligence sources say, Altaf Hussain still controls the Hyde lines of the party where his people, on the streets, are far more powerful than the party’s political representatives, many of whom are decent folk.

Corollary: the MQM Coordination Committee’s supplication is on behalf of the man in Edgware. Hence the reference to ‘clemency’ a la Baloch separatists. The idea seems to be that the party will happily expend its cadres that worked on the alleged instructions of Hussain if the ‘establishment’ agrees to let him off the hook.

As the Punjabi term goes, it’s a pretty maathee move but given the circumstances, it might just be the only one left with the MQM.

When did the army know they MQM had connection with India ?

When PML-N or PPP does not require MQM National Assembly votes to form Government. This is Arm twisting which is going on for the long.

Southern Sindh [independent Sindh] creation is the only solution which has to come sooner rather than later.