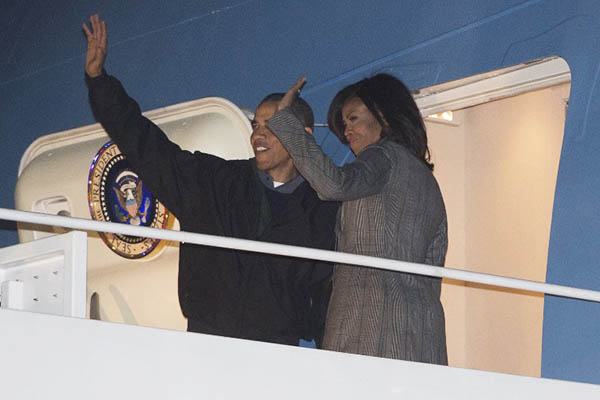 White House confirms that U.S. president will not be traveling to Agra during his trip.

Obama was scheduled to go to India’s famed monument to love accompanied by First Lady Michelle Obama at the end of a three-day visit to the country, during which he is to be chief guest at Monday’s Republic Day celebrations. Instead, the White House said Obama would travel to Riyadh from New Delhi on Tuesday morning to meet the new monarch after the death of Salman’s half-brother King Abdullah on Friday.

“The president regrets that he will be unable to visit Agra during this trip,” said White House press secretary Josh Earnest in a statement, referring to the town where the Taj Mahal is located.

Abdullah, the former Saudi king who led the Gulf state through a turbulent decade in a region shaken by the Arab Spring uprisings and Islamic extremism, died aged about 90. Saudi Arabia and the United States remained staunch allies during his nearly decade-long reign. Vice-President Joe Biden had been due to represent the United States in Riyadh, where dignitaries and leaders from around the world were arriving in Saudi Arabia on Saturday to offer their condolences. The White House said Biden would now remain in Washington.

Obama will hold talks with Narendra Modi during his visit to New Delhi, which comes just months after the Indian Prime Minister made a high-profile official visit to the United States. As well as holding bilateral talks, the leaders of the world’s two largest democracies will address business leaders and appear on a radio phone-in.

While observers do not expect any major policy breakthroughs during the three-day trip, both sides say the invitation to Obama for Monday’s Republic Day celebrations emphasizes a new closeness.

Modi was effectively blacklisted by the U.S. until last February when it became clear he had a real prospect of winning elections against the ruling center-left Congress party. The Hindu nationalist was chief minister of Gujarat when deadly communal violence erupted in 2002, leading him to be shunned by Washington and Europe.

In an interview published on Friday, Obama said “the stars are aligned” to enable the United States and India to forge a global partnership and expressed hopes of making “concrete progress” on a range of issues during his visit. But the cancellation of the Taj Mahal visit will deprive the country’s top tourist attraction of publicity at a time when the government is trying to boost visitor numbers.

Hundreds of cleaners had been hired to spruce up the white marbled mausoleum in Agra in preparation for the Obamas’ arrival on Tuesday. Their time in Delhi will be covered by a massive press pack and organizers wanted to ensure a picture-perfect backdrop.

Twitter users rushed to thank the president for orchestrating a cleanup of the mausoleum in the town of Agra, built by Mughal emperor Shah Jahan for his beloved empress who died during childbirth in 1631. “It was just Obama’s clever plan to get Agra cleaned up. Thank you Obama,” posted one under the name Anamika.