One Hundred Days of Suffocation

An Indian paramilitary trooper stands guard during a lockdown in Srinagar on Oct. 29, 2019. Tauseef Mustafa—AFP 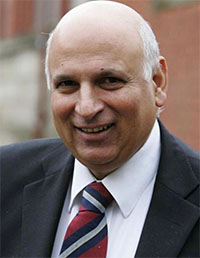 Last Tuesday, Nov. 12, I participated in the 550th birth anniversary celebrations of Baba Guru Nanak Dev Ji at Janam Asthan, Nankana Sahib in solidarity with Sikhs around the world. At the same time, tens of millions of innocent people marked the 100th day of their isolated confinement, coupled with unabated persecution, in India-Occupied Jammu and Kashmir. The Narendra Modi-led Bharatiya Janata Party’s actions have unleashed perhaps the biggest human tragedy since the Third Reich’s Holocaust targeting Germany’s Jewish population. Undoubtedly, humanity is touching its lowest ebb. The agony, helplessness and sufferings of innocent children and women in Kashmir at the hands of Indian paramilitary troops is unimaginable.

Aug. 5, 2019 will go down in the constitutional history of India as one of its darkest days. It will be remembered as a day of constitutional aggression where the so-called world’s largest democracy conspired to subjugate 12 million people against their wishes and against even the disputed instrument of accession of the region with India.

Since the imposition of curfew, all hell has been let loose on the innocent people of Jammu and Kashmir. Massive violations of human rights have been reported. Pellet guns, tear gas and bullets are being used on innocent children, women and elderly alike on daily basis. The youth and political leadership have been put under house arrest. Women are allegedly even being raped by Indian Security Forces in their houses.

A total media blackout has been imposed to suppress the blatant violations of human rights by [Indian P.M. Narendra] Modi’s administration. The human tragedy has been detailed by Barbara Crossette in a recent article for weekly The Nation in which she says: “The Indian Military occupation has exacted great psychological and physical tolls. Unbroken lockdowns and curfews are making it hard to get food and people are hungry. Stores are closed, jobs are lost. All communications are periodically cut. This time it’s different.”

Time for Kashmiris is not passing, rather it is turning in a circle with every day being progressively worse than the previous one. The people of Kashmir have been made to live under a reign of terror, tragic sadness, massacre, violence and alienation from the rest of world. The global conscience must wake up and must respond to this human, ethnic and religious cleansing in Kashmir. Humanity must win over the peddlers of an ideology of hatred and seclusion. The racist and absolutist ideology of Hindutva is a potent threat not only to minorities in India and Kashmir but also to global peace.

Suppressing Kashmiris’ right to self-determination through coercive means will yield no results for India. It’s a failed strategy. India must lift its siege of the valley now and let the Kashmiris breathe. Narendra Modi and his allies must not be allowed to get away with blatant violations of human rights in Kashmir. The Kashmiris’ right to self-determination, in accordance with the United Nations Security Council’s resolutions, must be upheld. It is high time for India to sit with Pakistan for a negotiated settlement of the Kashmir issue according to the wishes of its people. The time to act is now.

The darkest day is when Pakistan declared itself as an Islamic Republic as opposed to being secular. And ever since then, shedding crocodile tears for plight of Muslims in India and Kashmir is a Pakistani favorite. Its media, people and leaders ignore everything in front of them and find it easy to comfort themselves that it is because of India that they are the way they are. Wake up already. In India we have more Muslims that are rich and famous than the entire population of Hindus in Pakistan. In India we have had a Sikh PM, and Muslim President and countless number of MPs, CMs and even more serve military, police and government. And they are proud to do so. Show me how many Hindus in Pakistan have this landscape where they can thrive. Dont sit on Islamic chair and preach democracy to India. Leave India out of your radar and focus on your economy and progress.

Pakistanis should concentrate on its own people. they should bring back those mohajirs who are living in camps in Bangladesh for the last fifty years.

This is such a sad state of affairs.

This is absolutely terrible news, I hope there is a resolution soon.