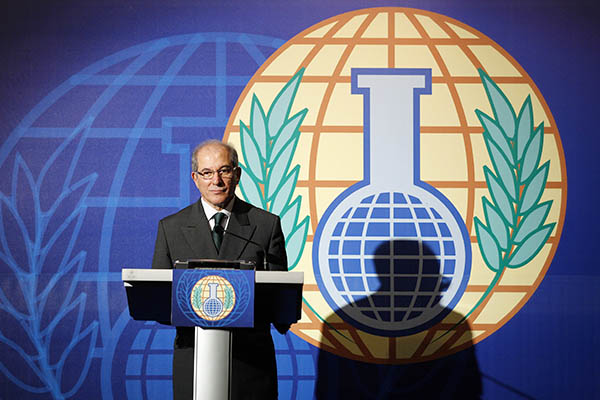 The watchdog overseeing the destruction of Syria’s chemical arsenal has won the Nobel Peace Prize for its efforts to rid the world of the devastating weapons.

In a surprise choice on Friday, the Nobel committee honored the U.N.-backed Organisation for the Prohibition of Chemical Weapons (OPCW) for “its extensive efforts” in banishing the scourge of chemical arms.

“Recent events in Syria, where chemical weapons have again been put to use, have underlined the need to enhance the efforts to do away with such weapons,” the Norwegian jury said in its statement.

The award came as OPCW arms experts and United Nations logistics and security personnel are on the ground in Syria and have started destroying weapons production facilities.

Despite the news, it was business as usual as a second OPCW team arrived in Damascus Friday, doubling the number of inspectors there to 60. “We will celebrate the Nobel Peace Prize when our mission in Syria is successfully completed,” said Jerry Smith, the Head of Field Operations for the OPCW mission in Syria, in a statement.

The nearly 31-month conflict between Syrian President Bashar al-Assad’s regime and rebels fighting to overthrow it has now killed 115,000 people. Under the terms of a U.N. Security Council resolution, Syria’s chemical arsenal must be destroyed by mid-2014. U.N. chief Ban Ki-moon estimated that up to 100 experts will be needed to destroy Syria’s sarin, mustard gas and other banned chemical arms by the deadline.

U.S. President Barack Obama said in a statement that the awarding of the Nobel reinforced the confidence the world has placed in the OPCW and its “inspectors taking on the unprecedented challenge of eliminating Syria’s chemical weapons program.”

The OPCW was founded in 1997 to implement the Chemical Weapons Convention signed on Jan. 13, 1993, a treaty with 189 members representing more than 98 percent of the world’s population. The convention is “one of the most successful non-proliferation agreements in history,” said Karl Dewey, a London-based expert with defense consultancy IHS Jane’s.

The OPCW was not considered among the frontrunners for the prize until the eve of the announcement. Teenage Pakistani education activist Malala Yousafzai and Congolese doctor Denis Mukwege had been among the favorites for this year’s prize.

Yousafzai, 16, who was shot by the Taliban for championing girls’ right to an education, thanked her supporters and congratulated the OPCW in a statement. “I would like to congratulate them on this much-deserved global recognition,” she said.

Obama and his wife Michelle welcomed the Pakistani schoolgirl activist to the Oval Office on Friday, the day she was passed over for the Nobel Peace Prize, and hailed her for her “inspiring and passionate” work on behalf of girls in Pakistan.

Former Soviet leader Mikhail Gorbachev, who won the peace prize in 1990, said this year’s Nobel would “provide the impetus to accelerate efforts to rid the world of these deadly weapons.”

This marks the second consecutive year an organization has won the prestigious award. Last year’s prize went to the European Union.

Since the OPCW came into existence 16 years ago, it has destroyed 57,000 tons of chemical weapons, the majority of them leftovers from the Cold War between the United States and Russia.

Paul Walker, a chemical weapons expert at the environmental group Green Cross International, said the prize was a testament to the OPCW’s “unique brand of effective practical diplomacy.”

To date, the OPCW has 189 members, with Syria due to become a full-fledged member of the convention on Monday.

The Nobel jury directly criticized the United States and Russia for failing to destroy their chemical weapons by April 2012, as required by the Chemical Weapons Convention. Israel and Myanmar signed in 1993 but have not yet ratified, according to the OPCW website.

The OPCW also provides assistance and protection to any member state subject to threats or attacks with chemical weapons.

Swedish chemical weapons expert Aake Sellstroem, head of U.N. weapons inspections in Syria, welcomed the attention given to chemical weapons with the Nobel Prize. “Later on, once we have got rid of all chemical weapons, it’s time to tackle nuclear weapons,” he told Swedish news agency TT.

OPCW spokesman Michael Luhan said the prize would not distract the organization from its work. “We’re in the process of trying to achieve something in Syria,” he said. “If we achieve the objectives of this mission, then there’ll be something to celebrate.”