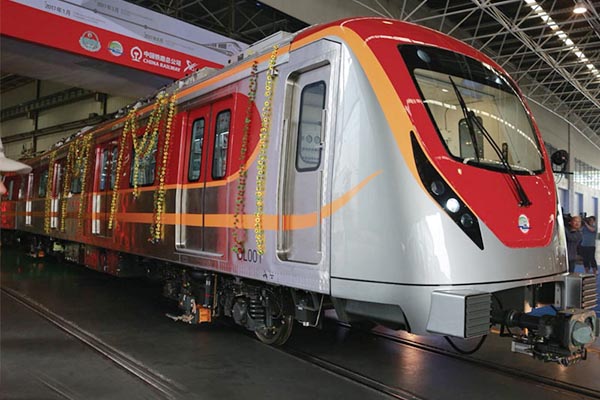 Often regarded as the mouthpiece of Beijing, the Global Times interviewed Chinese expert Zhou Rong, a senior research fellow at the Chongyang Institute for Financial Studies at Renmin University, on the mass rapid transit train set to be launched in Lahore within the first six months of 2020. The introduction of a first-rate, modern public transit service will be a major boon to the Pakistani economy and its people, said Zhou, adding that Lahore boasted a population of over 10 million people, increasing demand for viable public transportation.

Addressing increasing traffic congestion at an affordable cost would be key, Zhou said.

The Orange Line Metro Train was put through its first test run last week after the completion of the project’s physical infrastructure stage. The move is considered to be a major step forward under the China-Pakistan Economic Corridor (CPEC), though the project is being financed in its entirety by the Punjab government.

The test run last week covered the train’s entire 25-kilometer route. Covering 26 stations, including 24 elevated stops and two underground stations, the train is expected to cut travel time across the city by over 70 percent.

Zhou told Global Times the project was a token of China-Pakistan friendship, adding it would provide high-class transportation service of international standards. He said the Orange Line, as it is known in Pakistan, would benefit commuters and office-workers the most, noting efforts had been taken to facilitate women with areas exclusively set aside for them. He also advised the Punjab government to price tickets at an affordable level to allow the maximum number of citizens to avail it.

According to the Global Times, the focus of CPEC—now in its sixth year—was shifting from addressing Pakistan’s energy shortages to public transportation. “The rolling out of an electrified subway system shows that Pakistan’s energy issues are being effectively addressed,” Zhou added. The proposed subway system would comprise 27 energy-saving electric trains, with air-conditioned cabins and an operating speed of 80km per hour. It is expected to transport 250,000 passengers daily when it becomes fully operational. Another two rail lines are set to be added later, raising the total number of passengers to 500,000 daily by 2025.

The Orange Line was a flagship project of the previous Pakistan Muslim League (Nawaz) government, with then-Punjab chief minister Shahbaz Sharif claiming it could fix many of the growing problems facing Lahore’s transportation sector. It prompted much criticism and controversy, with critics claiming it lacked transparency and was harmful for the environment and heritage sites of the city. The project also faced many delays, mostly due to court cases against it that stalled construction work for 22 months. The work slowed down even further after the election of the incumbent Pakistan Tehreek-e-Insaf, with the provincial government even hinting that it might scrap the project altogether due to shortage of funds.

The project was funded with a soft loan from the Export-Import Bank of China as part of CPEC, and has been built via joint venture of China Railway Corporation and China North Industries Corporation.