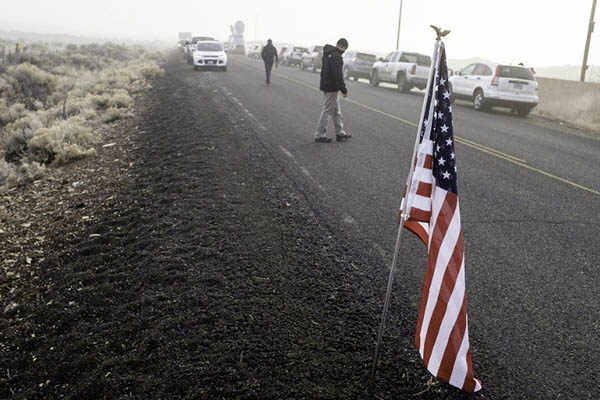 Last four holdouts surrender to FBI and will appear in court on Friday.

The last four armed occupiers of a wildlife refuge in Oregon surrendered to authorities on Thursday, ending a tense 41-day standoff over grazing rights on federal land that left one dead.

Jeff Banta, 46, of Nevada, Sean Anderson, 47, and his wife Sandra, 48, of Idaho, walked out of the Malheur National Wildlife Refuge shortly after 9:30 a.m. About 90 minutes later, the last protester, David Fry, followed suit, but only after vowing “liberty or death” and having threatened to commit suicide.

Fry, in an extraordinary exchange live-streamed online and at one point followed by 30,000 people, lashed out at the government, saying that unless his grievances are addressed he would not leave the refuge. But in the end he yielded. In a rambling diatribe before his surrender, the 27-year-old at one point said he wanted a pizza, then marijuana, before denouncing abortion and American foreign policy.

“The whole reason I am here is to protest against the government, to address my grievances,” he said. At another point in the conversation he warned: “I am actually pointing a gun at my head. It’s better to die with honor [than] be forced to live dishonorably.”

The Federal Bureau of Investigation said in a statement that the four holdouts had been taken into custody without incident and would appear before a judge on Friday. They face charges of conspiring to impede federal officers from performing their duties through the use of force, intimidation or threats.

Greg Bretzing, the FBI’s top agent in Oregon, said the standoff had been especially trying to area residents whose lives were disrupted. “Over the course of the last month, the people of Harney County have lived through an experience that is both highly emotional and physically exhausting,” he told reporters. “We have seen the occupiers and their outside supporters try to drive deep divisions between those who live and work here.”

The occupation of the refuge came to an end a day after Cliven Bundy—the Nevada rancher whose 2014 standoff with federal authorities over grazing rights inspired the Oregon activists—was arrested late Wednesday in Portland, Oregon.

Bundy, 74, was reportedly on his way to the wildlife refuge when he was detained on arrival at the airport, the FBI said.

The siege in Oregon began on Jan. 2 when two of Bundy’s sons, Ammon and Ryan, along with some 30 followers, took over the refuge to denounce federal land management policies in the American West. The Bundy brothers were among a dozen people arrested late last month after they ventured out of the refuge. The group’s de facto spokesman, LaVoy Finicum, was killed by police after he tried to get away.

The takeover of the wildlife refuge initially began as a protest against the jailing of two local ranchers, Dwight Hammond and his son Steven, who were convicted of arson and sentenced to prison. But the activists’ demands soon grew to include calls for the government to turn over federal land to local ranchers. In Oregon, nearly 53 percent of the land is federally owned.

The Hammonds distanced themselves from the movement and voluntarily began their scheduled prison sentences after the occupation began.

The Bundy family grabbed headlines in 2014 after another armed showdown with federal authorities over cattle grazing fees. That standoff ended with federal officials backing down and releasing cattle they had seized from the Bundys.

Cliven Bundy appeared in court on Thursday in relation to the Nevada standoff and was charged—like his sons—with conspiracy to interfere with a federal officer. He also faces weapons charges.