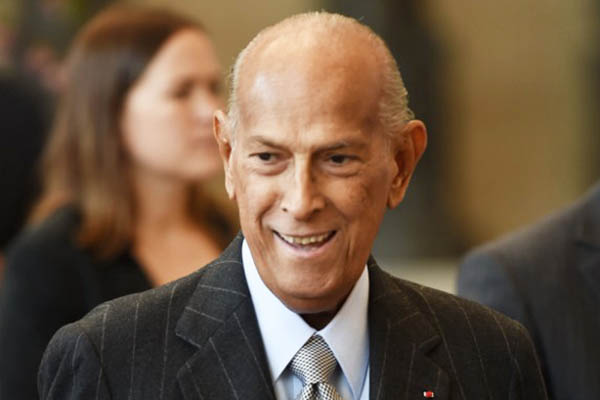 His company website bore only his trademark signature in white against a navy blue background. U.S. media reported his death at his home in Kent, Connecticut, quoting family members. He was diagnosed with cancer in 2006.

Earlier this month, his luxury brand announced that British-born designer Peter Copping would take over as creative director although that he would work closely with de la Renta on designing the next collection.

Schooled in the mastery of European couture, de la Renta worked until the end of his life, most recently designing the wedding dress for human rights lawyer Amal Alamuddin, who wed Hollywood heartthrob George Clooney in Venice last month. One of the world’s most eminent designers, his frocks were also worn by American first ladies from Jacqueline Kennedy and Nancy Reagan to Hillary Clinton and Laura Bush, as well as film stars such as Sarah Jessica Parker.

Tributes quickly poured in from friends, celebrities and younger designers who mourned the loss of one of America’s most eminent designers. Former first lady Bush said she and her husband, George W. Bush, were “deeply saddened” by his death, saying he had designed the favorite clothes of her and her twin daughters. “We will miss Oscar’s generous and warm personality, his charm, and his wonderful talents,” she said in a statement. “We will always remember him as the man who made women look and feel beautiful.”

U.S. singer Gloria Estefan said on Twitter de la Renta had been “a big part of 3 of my life’s biggest moments. Much love and peace 2 his family and all who loved him!”

“Saddened to hear the news about Oscar de la Renta. Thank you for bringing so much beauty into the world #RIP,” wrote designer Rebecca Minkoff. “Truly saddened by the loss of one of the greatest fashion icons of all time,” added designer and businesswoman Ivanka Trump.

Born on July 22, 1932 in the Dominican Republic, de la Renta left home to study in Madrid and work as an apprentice to Cristobal Balenciaga. In 1960 he moved to France to become an assistant at Lanvin in Paris, where he embedded himself in the world of haute couture, before moving to the United States to work for Elizabeth Arden.

He created his eponymous label in 1965 and over the decades became one of the most lauded designers in New York. He created clothes of timeless elegance, regal glamor and sophistication beloved by generations of women. He was twice president of the Council of Fashion Designers of America and honored with a string of awards.

In a career that spanned five decades, de la Renta saw his company grow into a multimillion-dollar empire that included ready to wear, fragrances, a home line and a bridal collection, which he launched in 2006. He married twice, first in 1967 to Francoise de Langlade, an editor at French Vogue and in 1989, six years after her death, he married American publisher Annette Reed.

Popular and charming, de la Renta built close rapports with fellow designers such as Karl Lagerfeld and John Galliano, whom he invited to spend time in his workshop after his career collapsed over an anti-Semitic rant.

“Everyone in life deserves a second chance,” said de la Renta at the time. “I think that life is about forgiving and helping people.”

He entertained generously with his wives, keeping a Rolodex of famous friends, including the Clintons, Henry Kissinger and the late writer Truman Capote. In an interview with New York Magazine published last year, de la Renta looked back on his long career and the changes in the fashion world.