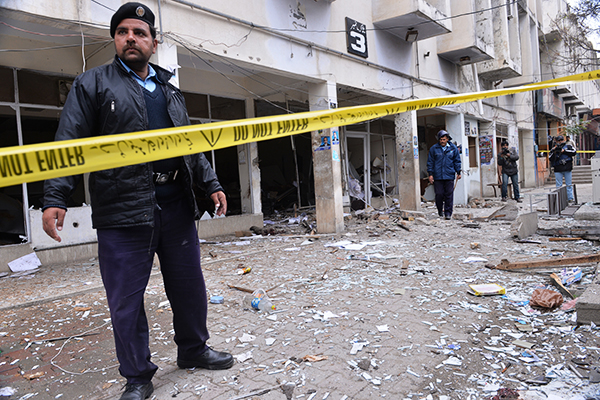 Peace talks with the Taliban or a military operation targeting them are merely two of the many options available to Pakistan’s government.

On Saturday, March 1, Taliban spokesman Shahidullah Shahid announced a month-long ceasefire. Shahid said the decision was made in consultation with the Taliban shura and came in the wake of positive signals from the government to the Taliban-nominated intermediary committee.

“We announce a month-long ceasefire from today and appeal to all our comrades to respect the decision and refrain from any activity during this period,” Shahid was quoted as saying.

The decision followed airstrikes by the military and the killing of top Taliban commander Asmatullah Shaheen, after 23 Frontier Corps soldiers, held captive for the last four years, were killed and beheaded by the Mohmand chapter of the Taliban and the gruesome video released on the Internet.

However, even as Shahid was announcing the temporary ceasefire, two IED explosions in the Jamrud area of Khyber Agency killed 11 khasadars of a security detail with polio workers.

The next attack since that announcement has come in Islamabad, the capital city, where, on Monday, March 3, a group of terrorists attacked the district courts in the heart of the busy F-8 area. They lobbed grenades, fired automatic weapons and while two blew themselves up, the rest of the attackers extricated after the attack. The attack left 11, including Additional Sessions Judge Rafaqat Awan, dead and 25 injured.

Judge Awan, incidentally, had refused an application from Lal Masjid supporters last year in April, asking him to try former General Pervez Musharraf for the operation. His grounds for dismissal: the application seeks “cheap popularity”.

Predictably, following the announcement of ceasefire and the two attacks, the talks and fight camps have gone on a tweet binge. While the talks camp is arguing, as is its wont, that certain forces do not want the talks to succeed, the fight camp is presenting the two attacks as further evidence that the state cannot and must not talk to these terrorist groups.

Between these positions is another one: if the TTP cannot control its groups, what’s the point of talking to it?

In a divisive atmosphere, very few are prepared to put things in a perspective. Consider.

The first and most important question to ask is also a basic one. What is the TTP? Is it a central headquarters, roughly along the lines of an army that can call on and off operations by its various units and sub-units? The answer is no. As I have argued multiple times here and elsewhere, the TTP is a franchise. While its core comprised the Mehsud tribes, it has since been joined by many groups. They share an ideology but their violent expression of that ideology varies from one group to another.

Another distinction is along tribal lines. In addition to other tribes and sub-tribes subsumed under the rubric TTP, the Taliban also include many Punjabi groups as well as foreigners—Uzbeks, Chechens, Arabs, Uighurs et cetera. These groups and individuals have a three-pronged affiliation: with the TTP, the Haqqanis and Al Qaeda. If one were to make a flowchart, the arrows will always lead both ways, connecting the multiple groups with the TTP, the Haqqanis and Al Qaeda, as also these three main entities with those groups. They share ideology, personnel, funds, training, operational expertise and so on.

Equally, the various groups have always had a high degree of operational and organisational autonomy. This is not a new model. Famous Egyptian journalist Mohamed Heikal in his book, Autumn of Fury: The Assassination of Sadat, writes:

“The new groups, such as that to which [Lieutenant] Khaled [Islambouli, who killed Sadat] belonged, were known as ‘anquds, the Arabic for a bunch of grapes, each ‘anqud being separate and self-contained, so that if plucked from the main bunch none of the other ‘anquds would suffer, nor would the removal of one grape on a bunch affect the other grapes. (pp.253)”

The model provides security and flexibility. However, on the negative side it also makes central control difficult. It is instructive to revisit at this point the statement by Shahid: “We announce a month-long ceasefire from today and appeal to all our comrades to respect the decision and refrain from any activity during this period.” Note: there is no “we order our units to stand down” but “we appeal to all our comrades.”

Of course one can argue, as some do, that this is a ruse. It could well be. But the essential point, that the TTP core does not directly control many of these groups, remains and any strategy must factor that in. This also indicates that these groups are not entirely, or at all, dependent for their funding and other logistics on the TTP. If anything, evidence suggests that the TTP is, to varying degrees, dependent on its various chapters and these groups for operational outreach.

Moreover, there are differences within the TTP, to use the term to include all its affiliates, on whether to talk to the government and on what conditions. There is also a split between the southern and northern Pashtun tribes on who controls the TTP since the death of Hakimullah Mehsud. The recent killing of Asmatullah Shaheen, who supported Fazlullah against Khan Said, is a case in point.

This situation offers both challenges and opportunities to the government. The challenge relates to the fact that any notion that talking to the TTP core will in and of itself mean that attacks will discontinue is delusional. That won’t happen.

Similarly, it is naïve to think that the TTP can control or punish groups that go against its guarantees, if at all it can give any. Intelligence analyses indicate there is much back and forth happening within the groups. People affiliated with Lal Masjid are also linked to Fazlullah and his men who are in turn squarely in the Al Qaeda camp, even as the Afghan National Directorate of Security looks the other way when they use Afghan territory for safe havens where they rest and retrofit.

The opportunity, however, is to isolate the tribes from the hardline elements. We have two examples of that: the slain Mullah Nazir in South Waziristan and Hafiz Gul Bahadur in the North. Nazir kept the Wazir tribes under strict control and, with help from the Army, managed to clear the area of all foreigners, especially Uzbeks. The deal with Bahadur has also largely remained intact even as some of his commanders have occasionally mounted attacks on the Army. Since the relocation of the Mehsuds and other TTP-affiliated groups to North Waziristan, Bahadur’s control has diminished to a large extent. That gives him an incentive against these elements. Similarly, with Hakimullah Mehsud dead and the mantle of leadership having slipped away from the Mehsuds, Khan Said is not a very happy man.

These are the fault lines. They must be exploited. They also allow not just strikes against fighters but strategies to choke funds and other supplies. Just like the army, the terrorist groups also face wear and tear of equipment and vehicles which need replenishments. Those are the weak spots and must be targeted. Regardless of the power of faith, guns need ammo and vehicles fuel. Neither is being paradropped. Both require supply routes and storage facilities. The wounded need medical facilities. Any intelligence agency worth its name should have information on these aspects of an insurgent-terrorist force or forces.

Additionally, the fault lines we talked about earlier must be explored. If we can wean the Mehsuds from this insurgency, the TTP franchise as we know it, will be deprived of almost 60 percent of its fighters. That is a huge number. This will also help restore South Waziristan to normalcy, something we have not been able to achieve fully in five years since the 2009 surge and the operation there. It will also help free Bahadur’s hands to deal with the foreigners in his bailiwick, just like Nazir did. As for the monies he receives for tolerating them, a deal with him for keeping his area cleared of these elements could include certain other incentives.

The current Army strategy of not going for a surge in North Waziristan is partly because it makes no sense to antagonise the Wazirs and get their population out of the agency. This is why the Army is relying on actionable intelligence, both HUMINT (human intelligence) and aerial ISR (intelligence, surveillance and reconnaissance) for strikes to be both accurate and precise. The debate over whether an operation is going on is a terribly uninformed one because an operation can be defined in many ways.

Also, the insistence by some political elements that the government must come clear on what it is doing is naïve. Some strategies are not spelled out. What should be done is to give out information to the opposition—as also to the government party—on a need-to-know basis. The right platforms for that are parliamentary committees on national security and defence.

Finally, the state’s response, even as it talks to those who want to talk, is to inform them very clearly that while it is serious in finding ways to settle this problem, it will continue to operate against groups that have ignored the ‘appeal’ of the Taliban shura to desist from attacking the state. It is on this point that the binary debate between the talks and fight clubs becomes meaningless and counter-productive. The talks club needs to realise that it is groups within the franchise that want to sabotage the talks, not some third force from another planet. The fight club needs to realise that fighting does not preclude the state from talking.

As for the third position of why the state should talk if the TTP is not fully in control of the groups, the proponents need to do a bit of arithmetic to understand that it is better to talk to four and isolate them from the rest rather than pushing those four into the hardline camp as well.

Ceasefires and talks are both meaningless and will not resolve the conflict until the militants can be convinced that for any meaningful dialogue they have to renounce violence as a means to furthering political ends. Surrender of arms by them would be a first step.
Unfortunately we seem incapable of pursuing a coherent and consistent plan to a logical conclusion. By dithering unnecessary lives are lost in addition to the cost of the numerous innocent lives that will be lost even when we pursue a sensible policy.

” the proponents need to do a bit of arithmetic to understand that it is better to talk to four and isolate them from the rest rather than pushing those four into the hardline camp as well.”
Hasn’t this been the narrative of PTI and IK all along?

Unprincipled shortcuts and hypocrisy never win any permanent victory. These too clever by half ploys of dividing and misleading will not work.
It is despicable for a state to “negotiate” with violent criminals. More than that unless hearts and minds can be won we cannot defeat the savages clothed in religious garb. We have to have a clear and principled stance, the State and its elected representatives have a monopoly control over use of legitimate violence. Anyone else who uses violence is a criminal and will be opposed.