P.M. Khan Thanks Saudi Arabia for ‘Steadfast’ Support to Pakistan 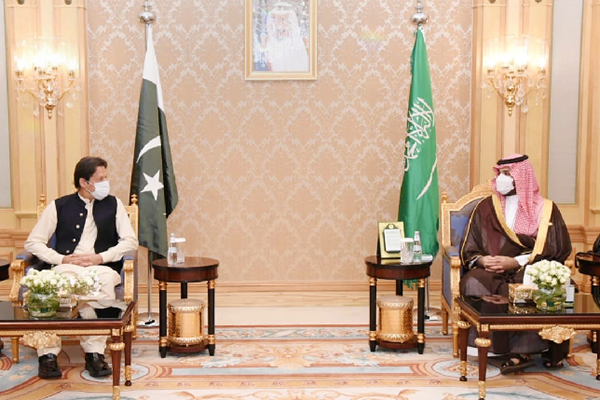 In meeting with crown prince, Pakistan’s premier praises Saudi Vision 2030 as means to transform socioeconomic development of the Gulf kingdom

In a meeting held on the sidelines of the Middle East Green Initiative Summit in Riyadh, the two leaders discussed bilateral ties, the climate crisis and the prevailing situation in Afghanistan. According to a statement issued by the Prime Minister’s Office, Khan lauded the crown prince’s Saudi Vision 2030 program, noting it aimed to transform the socioeconomic development of the Gulf kingdom in the 21st century.

He also congratulated MBS on the successful organization of the Middle East Green Initiative Summit on climate change, claiming it had clearly demonstrated the Saudi leadership’s commitment to take tangible steps for tackling climate change. Khan, read the statement, noted that the Saudi Green Initiative and the Middle East Green Initiative were aligned with similar initiative in Pakistan, such as the Clean and Green Pakistan program and Ten Billion Tree Tsunami. He emphasized that Pakistan would continue to offer its support for the implementation of such green initiatives.

Reaffirming Pakistan’s deep fraternal relations with Saudi Arabia, the prime minister highlighted the significance Islamabad attached to its strategic ties with the kingdom. “Because of the two holy mosques, we are tied to the kingdom … Saudi Arabia has always stood with Pakistan during the most difficult of times,” he was quoted as saying. According to the P.M. Office, both leaders pledged to further strengthen bilateral cooperation in all relevant fields.

Khan, on his second official trip to Saudi Arabia this year, claimed he could see the changes in the kingdom under the “dynamic leadership” of MBS. “He is someone who has a passion for change … and I see that,” he said.

Briefing the Saudi crown prince on the latest situation in Afghanistan, the prime minister reiterated the importance of ongoing engagement between the Taliban and the international community to forestall a looming humanitarian crisis. Hoping that the global community would take urgent steps to prevent economic collapse in Afghanistan, both leaders agreed to closely coordinate efforts to address the challenges facing the war-torn state.