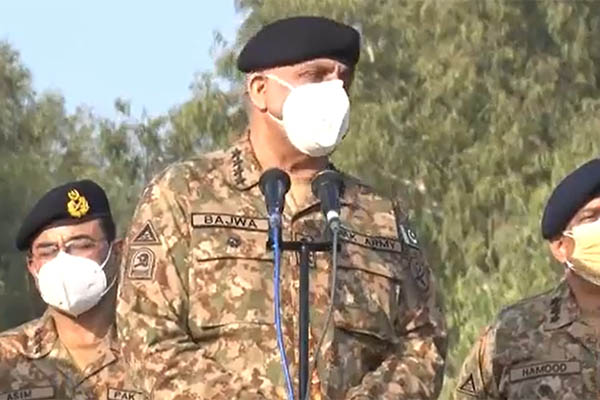 During a visit to a field exercise near Gujranwala, where he was accompanied by Chief of Air Staff Air Chief Marshal Mujahid Anwar Khan, they witnessed the ongoing exercise linked to the optimum use of long-range air defense weapons systems and airspace management. “Corps Commanders Mangla and Gujranwala were also present on the occasion,” read a statement issued by the Inter-Services Public Relations (ISPR).

According to the statement, “the exercise manifested the concept of Comprehensive Layered Integrated Air Defense in which Air Defense weapons of all regimes were incorporated.” It said that the exercise’s primary aim is to achieve optimum synergy amongst all air defense elements, maneuvering forces, and all aerial platforms, including fighter aircraft, helicopters and drones to master responses to “any misadventure by the enemy.”

“There is need for greater cooperation, integration and synchronization to tackle complex and fluid battlefield challenges that lie ahead,” the Chief of the Army Staff was quoted as saying by ISPR. “Pakistan armed forces, with the support of our great nation, are fully prepared to vanquish threats in all domains,” he added.

Upon his arrival to the field exercise area, Gen. Bajwa was received by Lt. Gen. Hamooduz Zaman Khan, the commander of the Army Air Defense Command.