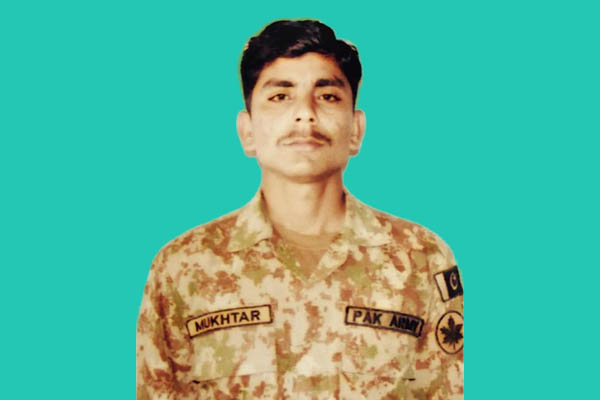 Pakistan Army soldier Sepoy Mukhtiar was martyred on Wednesday during exchange of fire with Indian forces along the Line of Control (LoC), the Inter-Services Public Relations (ISPR) said on Wednesday.

In a brief statement, the media wing of the armed forces said that the 22-year-old had been martyred after Indian troops committed a ceasefire violation in the Satwal sector Pakistan-administered Kashmir. “Pakistan Army responded effectively to Indian firing, causing substantial damage to Indian troops in men and material,” it added.

The latest ceasefire violation came less than a week after Indian troops targeted a United Nations Military Observers vehicle across the LoC. According to ISPR, the vehicle was targeted en route to the Polas Village, where the global body’s officials were traveling to meet civilian victims of Indian ceasefire violations. The vehicle was damaged in the assault, but no injuries or casualties were reported.

Pakistan’s permanent representative to the U.N. has written a letter to the U.N. secretary general and the president of the Security Council, calling for a transparent probe into the incident. The letter alleges that the deliberate targeting of a clearly marked U.N. vehicle marks a new level of recklessness from India and seeks to facilitate a military misadventure against Pakistan.