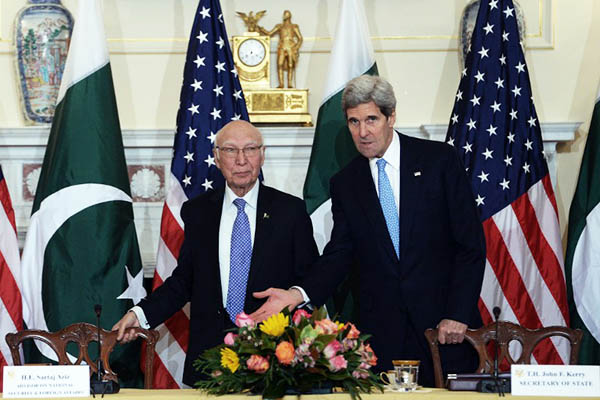 U.S. Secretary of State John Kerry on Monday told Pakistan it had the potential to become a future economic tiger as he backed reforms and inclusion of women and minorities.

The United States and Pakistan were meeting for the first time since October 2010 for their “strategic dialogue.” The process was undertaken to build trust between the two countries, but it quickly broke down due to a series of crises, including Pakistani rage over the U.S. raid that killed Osama bin Laden.

He praised Prime Minister Nawaz Sharif’s economic reforms, which include efforts to build Pakistan’s miniscule tax base, as part of a $6.7 billion loan package from the International Monetary Fund. “The United States has no doubt that Prime Minister Sharif’s policies will put Pakistan on a path towards a more prosperous future, and we fully support his goal of making Pakistan’s marketplace a tiger economy for the 21st century,” Kerry said.

The United States has added 1,000 megawatts of capacity to Pakistan’s troubled electricity grid and is looking at greater cooperation in energy, education and infrastructure, Kerry said. He also emphasized the importance of women and minorities for the country’s future. “We believe very strongly that Pakistan is stronger for the diversity and dynamism of its people and is strongest when every man and woman in Pakistan, regardless of religion or sect or gender, participates in full in society,” Kerry said.

Pakistan has trudged forward at a growth rate of around three percent over the past five years, short of the levels seen as needed for it to tackle widespread poverty. The growth is well below the growth clocked by East Asia’s “tiger” economies or neighboring India.

The central State Bank of Pakistan has been more optimistic, projecting GDP growth of up to four percent in the current fiscal year. The IMF has said that Pakistan is on track with reforms but has warned of dwindling foreign reserves and moved upcoming consultations to outside the country due to security concerns.

Pakistan, once the main supporter of Afghanistan’s Taliban, quickly switched sides after the September 11, 2001 attacks, developing a fractious partnership with the United States which has defied Islamabad’s public warnings by launching drone attacks against militants deep inside the country.

With President Barack Obama planning to withdraw combat forces from Afghanistan later this year, ending the longest-ever U.S. war, both Washington and Islamabad are watching uneasily as Afghan President Hamid Karzai hesitates to sign a deal that would allow a limited role for Western troops.

Sartaj Aziz, Sharif’s national security adviser, said that Islamabad wanted to turn a “transactional relationship” into a deeper partnership in which the United States “will not look at Pakistan from the two specific lenses of Afghanistan and terrorism.” Aziz repeated common Pakistani complaints that the United States abandoned the country in the early 1990s after they collaborated to defeat Soviet forces in Afghanistan.

In a joint statement, Aziz and Kerry called on the Taliban to enter talks with Afghanistan, saying that reconciliation was “the surest way to end violence and ensure lasting stability.” The statement called for “non-interference” in Afghanistan—likely a nod to Pakistan’s concerns about India—but also supported efforts to improve relations between Islamabad and New Delhi.