Pakistan Crosses 300 Deaths Due to COVID-19

Confirmed cases of coronavirus climb to 14,079 with 3,233 recoveries

According to the government’s official dashboard, there were 204 new recoveries and 751 new infections in the past 24 hours. The rising tally is now on track to exceed government estimates, which had projected the country’s total confirmed coronavirus cases to hit 15,000 by April 30. Pakistan’s testing capacity remains constrained, with only 6,467 tests having been administered nationwide in the past 24 hours against claims the country now has the capacity to test 20,000 people/day.

Sindh Governor Imran Ismail on Monday night confirmed that he had tested positive for the novel coronavirus. “[Prime Minister] Imran Khan taught us to fight out the most difficult in life and I believe this is nothing against what we are prepared for,” he posted on Twitter, adding that he would “fight it out.”

Meanwhile, the government also announced several new relief measures to help those worst impacted by the movement restrictions imposed to curb the spread of the coronavirus. The new packages, announced by Industries Minister Hammad Azhar, would exempt small businesses and industrial units from three months of power bills, and would provide a cash payment to people who have lost their jobs during the pandemic.

The country’s most populous province recorded 194 new infections in the past 24 hours, raising its net total of confirmed COVID-19 cases to 5,640. Punjab has also reported 8 new deaths, bringing its casualty count to 91, currently the second-highest provincial toll in Pakistan.

Provincial capital Lahore, meanwhile, jumped to comprising 27.31 percent of the confirmed coronavirus cases across Pakistan, up from 23.12 percent a day earlier.

The Sindh cabinet on Monday announced that due to the financial constraints resulting from the economic crisis caused by efforts to curb the spread of coronavirus, no lawmaker would take any salary from the government until June 30. This marks the Sindh cabinet as the first to donate the salaries of its members for the fight against COVID-19.

According to the provincial Health Department, of the 4,956 confirmed cases in the province, 3,524 have been recorded in provincial capital Karachi, of which 402 have recovered and 79 died. The metropolis currently has 3,043 active cases of the virus, 254 more than 24 hours earlier. 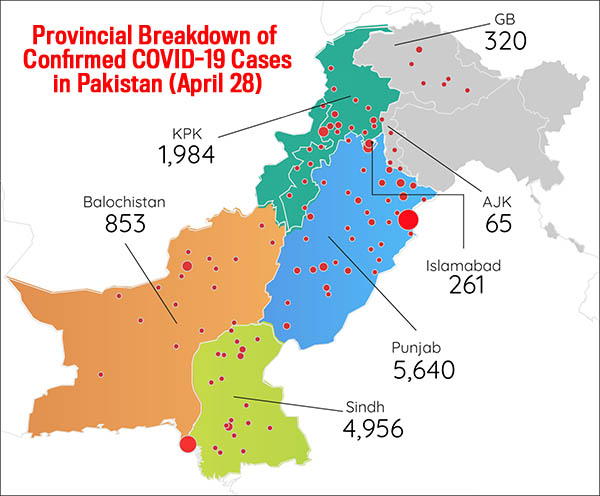 The province continues to report the highest fatality rate in the country, hitting 104 on Monday, comprising a third of nationwide deaths due to the novel coronavirus.

Overall, the province has now reported 853 confirmed cases of the novel coronavirus, with 14 deaths and 176 recoveries. It currently has 663 active cases. Per the Balochistan Health Department, a bulk of the patients—over 80 percent—are being reported from provincial capital Quetta.

Chief Minister Jam Kamal on Monday told a press conference that the number of locally-transmitted cases in the province was slowly increasing, and urged people to cooperate with movement restrictions and social distancing to bring the pandemic under control. He warned that the lockdown would have to be extended if people did not start following government instructions.

In Gilgit-Baltistan, novel coronavirus cases rose to 320, with no new deaths and 3 new recoveries. Overall, 3 deaths have been reported from the region and 222 recoveries, leaving 95 active cases, 1 less than a day earlier.

Pakistan-administered Kashmir has reported 6 new infections, and no new recoveries or deaths in the past 24 hours, raising its overall cases to 65, with 35 recoveries. The region currently has 30 active cases, 6 more than a day earlier.

Globally, the virus has now infected more than 3,065,150 people, with over 211,600 reported deaths. Governments across the world have halted flights, locked down towns and cities and urged people to stay at home, but there are signs of easements to help shuttered economies recover. Overall, around 992,860 patients of the 3 million+ infected have recovered thus far.