The Government of Pakistan on Monday reported that the confirmed number of cases in the country had hit 8,519, with 176 deaths and 1,970 recoveries. The country currently has 6,373 active cases of the coronavirus.

Despite claims by Special Assistant to the P.M. on Health Dr. Zafar Mirza and Prime Minister Imran Khan, there has yet to be a slowdown in the rate of infections in Pakistan. Due to the rising toll, and reducing number of recoveries, Pakistan now has a 2.1 percent fatality rate, up from 1.8 percent three days ago. Similarly, its recovery rate has gone down from over 25 percent to 23.4 percent.

Amid rising concerns that the government is not testing elderly whose bodies arrive at the hospital without any treatment—potentially ignoring that they might have contracted coronavirus—Dr. Mirza has announced that a probe is underway to determine the exact nature of the deaths. “If tests haven’t been done, you cannot say whether a person has died from COVID-19,” he told a press briefing, adding that without testing, any conclusions would be “mere speculation.”

Pakistan’s most populous province continues to report the highest number of confirmed COVID-19 cases, hitting 3,822 on Sunday night, with 42 deaths and 702 full recoveries. The province currently has 3,078 active cases of coronavirus.

The highest number of cases has been reported from members of the Tablighi Jamaat in Raiwind, 1,531, while returning pilgrims reported 701 cases, and provincial capital Lahore comes in third at 584. The province also has 94 prisoners who have tested positive for COVID-19.

“We appreciate our frontline workers for their tireless efforts. Insh’ Allah we will be able to avert this crisis!” Punjab Chief Minister Usman Buzdar posted on Twitter Sunday night. He said that people at quarantine centers who had tested negative for COVID-19 had begun the process of returning to their home districts.

The province that has come out hardest against the coronavirus, implementing movement restrictions that have been criticized by members of the ruling Pakistan Tehreek-e-Insaf, reported its highest single-day death toll on Sunday of 8 people, raising the provincial tally to 56.

In a message shared on social media, Sindh Chief Minister Murad Ali Shah said that fatality rate in the province stood at 2.1 percent, while the recovery rate was 25 percent. The chief minister added that 24,458 tests had been conducted so far and 2,537 people had tested positive for the virus, translating to a ratio of 10.4 percent. 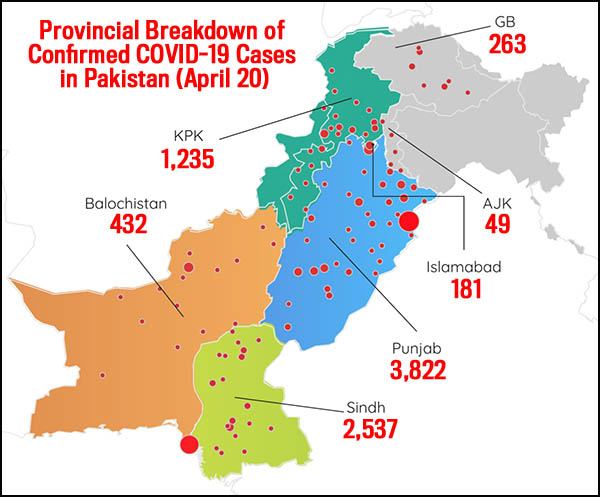 The province is currently reporting the highest number of deaths from the coronavirus, 67, 11 more then the next highest of 56—Sindh. Of those, more than 10 were reported within the past 24 hours. The highest number of cases has been reported from provincial capital Peshawar, 321, making up nearly 75 percent of the 1,235 confirmed cases in the province.

“Uncertain times lie ahead. But we must overcome fear and pain. We must bear criticism. We must push ahead when not everything is clear. Because if we do so, Insha’Allah, we shall prevail,” posted Health and Finance Minister Taimur Jhagra on Twitter.

The country’s largest but least populated province has reported 56 new cases over the past 24 hours, raising its total to 432. The new cases were all reported from Quetta, Mastung, Jaffarabad, Chaman and Sibi, according to provincial spokesperson Liaquat Shahwani.

The Islamabad Capital Territory on Monday reported that the confirmed number of COVID-19 cases had hit 181, with 3 deaths and 20 recoveries. The federal capital currently has 158 active cases. Meanwhile, in Gilgit-Baltistan, the infections rose to 263, with 3 deaths and 194 recoveries. The region’s active cases have risen to 66. In Pakistan-administered Kashmir, which has thus far reported no deaths from COVID-19, the total number of confirmed coronavirus cases rose to 49, with 10 recoveries, leaving 39 active cases.

Globally, the virus has now infected more than 2,407,400 people, with over 165,000 reported deaths. Governments across the world have halted flights, locked down towns and cities and urged people to stay at home. Overall, around 625,200 patients of the 2.4 million+ infected have recovered thus far.