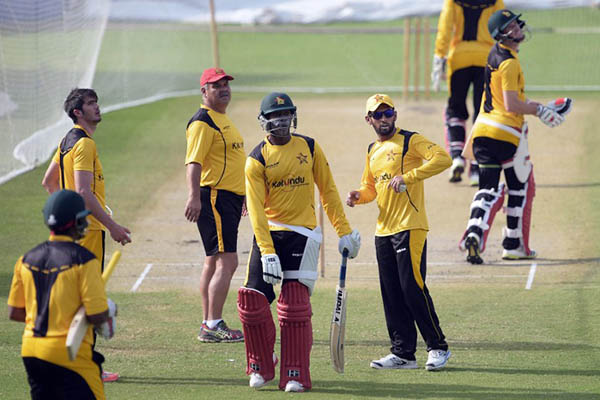 Zimbabwe cricketers at a practice session in Lahore. Aamir Qureshi—AFP

Pakistan are targeting their first series win in 17 months in the second day-night match in Lahore on Friday, hoping to capitalize on the suspension of Zimbabwe’s in-form captain Elton Chigumbura.

Pakistan’s last one-day series win came against Sri Lanka in the United Arab Emirates in February 2014 before embarking on a five-series losing streak. Having won the first of three-matches by 41 runs in Lahore on Tuesday, Pakistan captain Azhar Ali said he hoped his team would take advantage of Chigumbura’s absence after the visiting skipper struck 117 of 95 balls but was slapped with a two-match ban for a slow-over rate.

“I think Elton was in great form,” said Ali of his counterpart who fell three overs short in the regulated time on Tuesday. “He [Chigumbura] was their captain as well so it’s a big loss for Zimbabwe, obviously as an opponent we wanted a full Zimbabwe side but it’s an advantage for us and we would like to capitalize on it.”

Pakistan scored 375-3—their highest total against Zimbabwe in all one-day matches—before bowing out at 334-5 on Tuesday, a concern for Ali. “Our batting is doing very well but pitches are very good for batting so sometimes it gets tough for bowlers and we need improvement in that area,” he said.

Opener Hamilton Masakadza, who will now lead Zimbabwe, hoped his side would be able to overcome the loss of Chigumbura as well as middle-order batsman Craig Ervine. Ervine missed both the Twenty20 matches due to flu before injuring his hamstring in the one-day international.

“Obviously it’s a big blow on both fronts, in terms of the way he’s been batting and also in terms of his leadership out there on the field,” Masakadza said. “But what’s being done is done, we have to move on from here and hopefully the guys sitting out step up and fill in his shoes,” added Masakdza, who has previously captained in seven matches but lost all of them. “Obviously we haven’t played that bad cricket, we’ve got into good positions at times so it’s just a matter of working to make sure we get into the same positions but making sure we try and follow through with better results,” he added.

Zimbabwe is the first Test playing country to tour Pakistan in six years following the suspension of international cricket in the country in the wake of the 2009 attacks on the Sri Lankan team bus in Lahore. The series is being played under massive security with 4,000 policemen deployed in and around the Qaddafi Stadium.