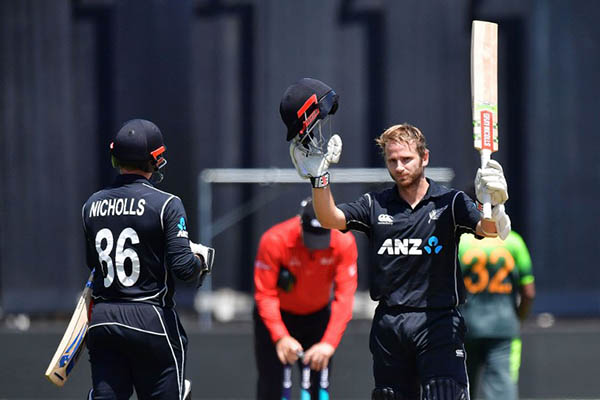 Kane Williamson scored a century and Tim Southee captured three wickets in a devastating spell to guide New Zealand to victory over Pakistan in a rain-shortened One Day International on Saturday.

New Zealand won the match by 61 runs under the Duckworth-Lewis system to take a 1-0 lead in the five-game series while ending Pakistan’s nine-match winning streak in ODIs.

With Williamson top scoring with 115 off 117 balls, New Zealand posted a daunting total of 315 for seven on a wet and windy day at the Basin Reserve.

Pakistan were struggling at 161-6 in the 31st over when rain forced the players from the field, before play was eventually called off.

Pakistan opener Fakhar Zaman finished unbeaten on 82 but received little support from his teammates, who had arrived in New Zealand on a roll after winning last year’s Champions Trophy tournament.

Southee rocked the tourists from the outset of their innings when he dismissed Azhar Ali and Babar Azam, both leg before wicket, in successive deliveries in the first over. Southee missed out a hat-trick but dismissed Shoaib Malik, caught behind for 13, after Mohammad Hafeez fell to a Trent Boult bouncer for one, leaving Pakistan in deep trouble at 37-4 long before the rain set in.

After winning the toss and opting to bowl first, Pakistan also had the worst of the weather while in the field.

For more than 20 overs the umpires kept the bails off after they tired of repeatedly replacing them after they were blown away. But the wind did not appear to bother Williamson, who struck eight fours and one six in reaching his 10th ODI century after he was given a life on 26 when dropped by wicketkeeper Sarfraz Ahmed.

After sharing a 90-run partnership off 80 balls with Henry Nicholls, the end for Williamson came in the 48th over when he steered a Rumman Raees delivery to the safe hands of Hasan Ali who was central in most of the key New Zealand wickets.

Colin Munroe (58) and Henry Nicholls (50) were both caught behind off Hasan who also bowled Ross Taylor for 12 to finish with three for 61.

Martin Guptill, who put on 83 with Munro for the first wicket, was out for 48 to give Fakhar his first ODI wicket.

The second match in the series is in Nelson on Tuesday.