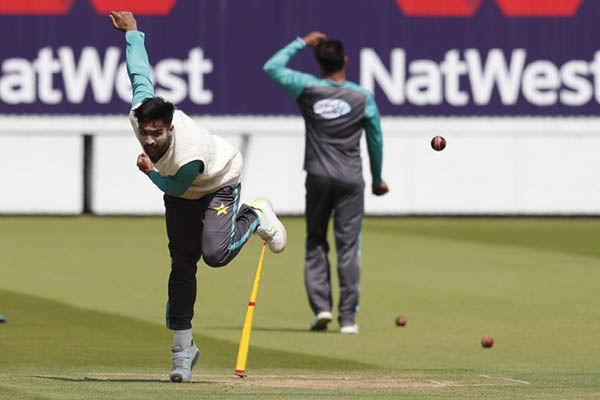 Hopes that a return home and a rejigged top-order picked by new national selector Ed Smith would help rid England of the batting slumps that plagued them during a run of seven straight Tests without a victory in Australia and New Zealand quickly proved illusory as they were dismissed for just 184 inside 59 overs.

Abbas, in his first match at ‘the home of cricket,’ finished with excellent figures of four for 23 in 14 overs. Meanwhile the recalled Hasan, who did not play in Pakistan’s win over Test debutants Ireland in Dublin concluded last week, took four for 51 in 15.2 overs.

Both bowlers maintained a disciplined line and length with Hasan, a stars of Pakistan’s Champions Trophy one-day tournament triumph in England last year, telling Sky Sports: “There was no need for bouncers because we were getting a lot of help from the pitch for bowling full and straight. Getting experience of playing in England in the Champions Trophy was a good thing for us.”

Pakistan then consolidated their strong position by reaching stumps having lost just Imam-ul-Haq to be 50 for one—a deficit of 134 runs.

Azhar Ali was 18 not out and Haris Sohail, missed in the slips when Ben Stokes dived across Dawid Malan, unbeaten on 21.

Alastair Cook in his 153rd consecutive Test, which equaled Australia great Allan Border’s all-time record for successive appearances at this level, was the only England batsman to play an innings of substance, the left-handed opener making 70. But shortly before tea Cook was bowled by Mohammad Amir, a teammate when Essex won the County Championship last season, as the left-arm quick produced a brilliant delivery that cut away late off the pitch to clip the top of the off stump.

“We’re behind a little bit. Pakistan have had the better day,” said Cook, England’s record Test run-scorer. “But with a five-day Test match you have a chance to come back. Fifty for one can very quickly become 80 for four.”

England, who had been 165 for five at tea, lost their last five wickets for a meager 16 runs in 27 balls.

Joe Root, the England captain, opted to bat first in the opening match of this two-Test series despite the fact that both sides had concerns over the reliability of their respective top orders.

Overcast skies allied to a green-tinged pitch promised to assist Pakistan’s pacemen but Cook defended the decision of his successor as England captain by saying: “It was a really tricky one. The pitch is dry, the forecast is it’s going to get warmer, but there is live grass on it.” And in truth several batsmen contributed to their own dismissal, with Cook looking on as the other three members of England’s top four all fell in single figures.

Abbas made the breakthrough when he bowled Mark Stoneman (four) with a late swinging delivery. Root, promoted up the order to number three, also fell for four when a loose drive off Hasan saw him caught behind by opposing captain Sarfraz Ahmed. Jonny Bairstow (27) and Ben Stokes (38) threatened to get going but could not stop the post-tea slide.

That this was indeed Pakistan’s day was clear when Asad Shafiq held a difficult catch at second slip to dismiss Jos Buttler after an edged drive off Hasan.

The innings ended when Amir running back at mid-on, caught Mark Wood.

It was the latest memorable Lord’s incident for Amir, who got his name on the honors board with six wickets against England at MCC’s headquarters in 2010—the same match where his involvement in a spot-fixing scandal led to a jail sentence and a five-year ban from cricket.

Thursday’s catch and the dismissal of Cook were moments of unalloyed joy, however, to set alongside Amir’s role in Pakistan’s Test win over England at Lord’s two years ago—a victory that helped them to a 2-2 draw in a four-match series.