Despite government claims that COVID-19 is on the decline in Pakistan, the country was on Monday deemed ‘high-risk’ by Kuwait’s aviation regulator, which placed it on a list of 31 countries that is has banned all commercial flights to. The announcement followed the World Health Organization (WHO) declaring that there is no “zero risk” when considering import or export of infections in the context of international travel.

Pakistan’s welcome decline in the daily infections and overall cases, meanwhile, has encountered some trepidation from experts who warn that the country has yet to fully utilize its claimed testing capacity of 71,780 and is currently testing significantly below numbers proposed by global health experts. According to WHO, Pakistan’s testing regimen likely only records the most symptomatic patients while ignoring the spread among asymptomatic carriers.

Chief Minister Usman Buzdar has claimed the smart lockdown policy—as well as a decision to increase the number of cattle markets—had proven successful in containing the spread of coronavirus during Eidul Azha. He has also claimed the number of daily new COVID-19 infections have decreased.

On Tuesday, authorities reported 5 new deaths due to COVID-19, raising total fatalities to 2,153. The province also reported 139 new infections, raising confirmed cases to 93,336, against 82,575 recoveries. There are now 8,608 active cases of the virus in the province.

Chief Minister Murad Ali Shah on Monday urged people to not leave their homes without masks, adding that carelessness at this stage risked increasing the daily infection rate once more. The recovery rate in the province has now reached 91 percent, he added.

The provincial government has decided to award Shuhada Package to all healthcare providers who have died due to COVID-19 in its public sector hospitals. “Each doctor, nurse, paramedic and others will get Rs. 7 million as one-time Shuhada Package. A committee has been constituted to consider such cases,” according to Health Secretary Syed Imtiaz Hussain Shah.

The provincial government on Tuesday reported 6 new deaths, raising its death toll to 1,208. In the past 24 hours, its recoveries rose by 135 to 29,150, while its confirmed cases have increased by 30 to 34,253. There are currently 3,895 active cases of coronavirus in the province.

The provincial government on Monday issued a notification extending its ongoing lockdown restrictions by 15 days until Aug. 17. “[The] threat of the coronavirus still exists and restrictions on social distancing and precautionary measures are required to be put in place for the safety of human lives,” it added.

Healthcare experts on Monday warned that the province had likely witnessed far more casualties due to COVID-19 than official data would suggest, claiming it is official practice to downplay the number of fatalities.

Confirmed cases of the novel coronavirus in the province on Tuesday rose by 3 to 11,777. Overall, 136 people have died and 10,213 patients have fully recovered from the virus, leaving 1,428 active cases of COVID-19. 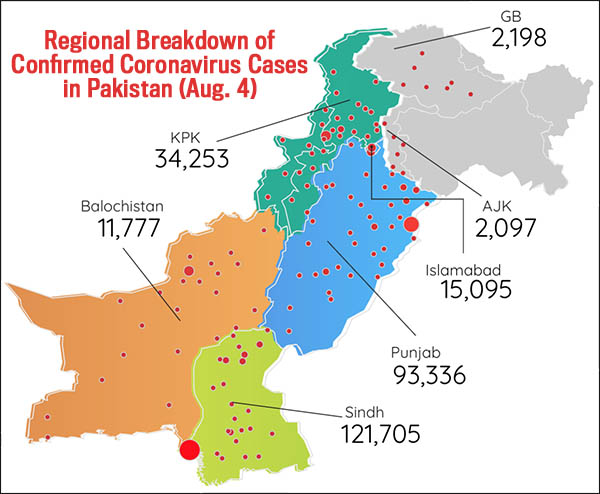 Islamabad on Tuesday raised its confirmed coronavirus cases by 19 to 15,095. There were 2 deaths and no new recoveries in the past 24 hours, raising death toll to 167 and sustaining recoveries at 12,678, leaving 2,250 active cases.

Confirmed cases of the novel coronavirus in Gilgit-Baltistan rose by 18 on Tuesday to 2,198. The region reported no new deaths, sustaining toll at 55, while its recoveries have increased by 22 to 1,801, leaving 342 active cases.

In Pakistan-administered Kashmir, confirmed cases have increased by 4 to 2,097. There was no new death and 88 recoveries in the past 24 hours, leaving 54 fatalities and 1,731 fully recovered. It has 312 active cases of COVID-19.

Globally, the virus has now infected more than 18,446,765 people, with over 697,222 reported deaths. Governments across the word halted flights, locked down towns and cities and urged people to stay at home at the peak of the virus’s spread, but there are now signs of easements in nations that have reined it in to help shuttered economies recover. Overall, around 11,677,720 patients of the 18.4 million+ infected have recovered thus far.