A meeting of all provincial education ministers, also attended by federal education minister Shafqat Mehmood, announced on Wednesday that all educational institutions in the country would be allowed to reopen from Sept. 15. The officials said that action would be taken against any school or university that reopened earlier and Mehmood urged private schools to ensure they were in compliance with standard operating procedures to curb the spread of COVID-19.

Pakistan’s welcome decline in daily infections and overall cases, meanwhile, has encountered some trepidation from observers who warn that the country has yet to fully utilize its claimed testing capacity of 68,470—which has actually been reduced from an earlier 71,780—and is currently testing significantly below numbers proposed by global health experts. According to the World Health Organization, Pakistan’s testing policies likely only record the most symptomatic patients while ignoring the spread among asymptomatic carriers.

The provincial government has granted additional exemptions in its lockdown restrictions, and allowed industries and construction sector to operate 24 hours a day, 7 days a week—subject to adoption of SOPs/guidelines.

On Thursday, authorities reported 5 new deaths due to COVID-19, raising total fatalities to 2,162. The province also reported 276 new infections, raising confirmed cases to 93,847, against 85,232 recoveries. There are now 6,453 active cases of the virus in the province.

Provincial Industries Secretary Javed Khan Marwat on Wednesday said that COVID-19 had halted economic activities globally, and vowed that the government would overcome this through joint efforts with trade bodies and the business community.

The provincial government on Thursday reported 2 new deaths, raising its death toll to 1,215. In the past 24 hours, its recoveries rose by 802 to 30,057, while its confirmed cases have increased by 35 to 34,359. There are currently 3,087 active cases of coronavirus in the province. 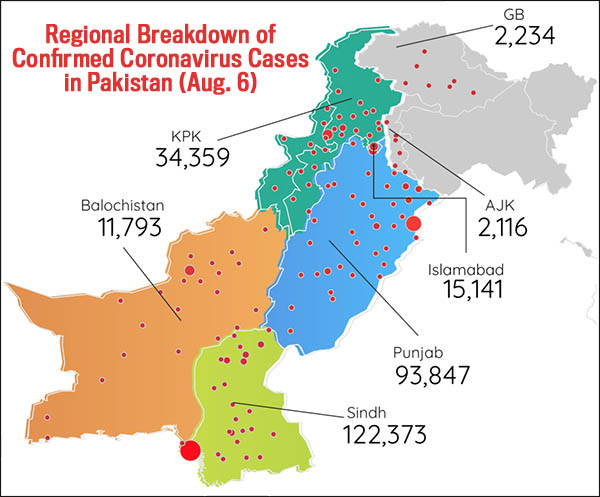 The province has not reported any new deaths due to COVID-19 since July 22, the first region of the country to do so. Earlier this week, it extended until Aug. 17 it’s ongoing “smart lockdown,” with a notification maintaining that this was necessary for the “safety of human lives.” Under the extended restrictions, all people have to wear face masks in public; there is a ban on gatherings of more than 10 people and sit-ins and processions at public places; more than two people cannot travel in the same car.

Confirmed cases of the novel coronavirus in the province on Thursday rose by 13 to 11,793. Overall, 136 people have died and 10,258 patients have fully recovered from the virus, leaving 1,399 active cases of COVID-19.

Islamabad on Thursday raised its confirmed coronavirus cases by 19 to 15,141. There were no new deaths and 101 recoveries in the past 24 hours, sustaining death toll at 167 and raising recoveries to 12,833, leaving 2,141 active cases.

Confirmed cases of the novel coronavirus in Gilgit-Baltistan rose by 16 on Thursday to 2,234. The region reported no new deaths, sustaining toll at 55, while its recoveries have increased by 26 to 1,846, leaving 333 active cases.

In Pakistan-administered Kashmir, confirmed cases have increased by 11 to 2,116. There were no new deaths and 32 recoveries in the past 24 hours, leaving 55 fatalities and 1,836 fully recovered. It has 225 active cases of COVID-19.

Globally, the virus has now infected more than 18,977,635 people, with over 711,220 reported deaths. Governments across the word halted flights, locked down towns and cities and urged people to stay at home at the peak of the virus’s spread, but there are now signs of easements in nations that have reined it in to help shuttered economies recover. Overall, around 12,166,745 patients of the 18.9 million+ infected have recovered thus far.