Pakistan on Saturday reported another 586 infections of the novel coronavirus after conducting 25,537 tests—a positivity ratio of 2.29 percent.

Dr. Faisal Sultan, the special assistant to the P.M. on health, has credited the decision to coordinate different provincial responses—with military help—for the decline in COVID-19 cases in Pakistan. He said this had allowed officials to obtain accurate data and act on it. However, he cautioned, “there are always great unknowns in science and epidemiology and complex social sciences and interactions. If anyone says they really know a final answer, they are wrong.”

The provincial government has issued SOPs to curb the spread of COVID-19 during Muharram gatherings and processions. Under the guidelines, anyone who participates in a majlis or procession is urged to wash their hands frequently, utilize sanitizers, wear masks, maintain social distancing, and avoid physical contact.

On Saturday, authorities reported no new deaths due to COVID-19, sustaining fatalities at 2,188. The province reported 99 new infections, raising confirmed cases to 96,057, while its recoveries have increased by 901 to 91,134. There are now 2,735 active cases of the virus in the province.

Chief Minister Murad Ali Shah, in his daily briefing on Friday, announced that there were 4,458 patients under treatment across the province, with 4,139 of them in home isolation, seven at isolation centers and 312 at different hospitals. He said 233 of these patients were in critical condition, with 32 of them shifted to ventilators.

Planning Minister Asad Umar, who heads the NCOC that monitors Pakistan’s COVID-19 response, on Friday warned that just because the coronavirus had reduced in Pakistan, this did not mean the risk was over. In a posting on Twitter, he said the government was prepared “for every occasion which can increase cases,” and urged the public to take care over Muharram and when schools reopen from next month.

The provincial government on Saturday reported 3 new deaths, raising death toll to 1,246. In the past 24 hours, its recoveries rose by 407 to 33,300, while its confirmed cases have increased by 57 to 35,602. There are currently 1,056 active cases of coronavirus in the province.

Confirmed cases of the novel coronavirus in the province on Saturday rose by 49 to 12,473. Two more deaths were recorded, raising fatalities to 141, while 11,310 patients have now fully recovered, leaving 1,022 active cases of COVID-19. 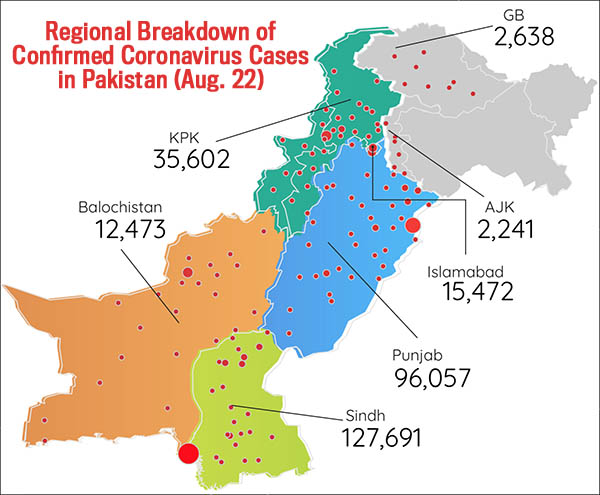 Islamabad on Saturday raised its confirmed coronavirus cases by 19 to 15,472. There were no new deaths and 271 recoveries in the past 24 hours, sustaining death toll at 175 and raising recoveries to 14,372, leaving 925 active cases.

Confirmed cases of the novel coronavirus in Gilgit-Baltistan rose by 34 on Saturday to 2,638. The region reported no new deaths, sustaining toll at 63, while its recoveries have increased by 22 to 2,257, leaving 318 active cases.

In Pakistan-administered Kashmir, confirmed cases have increased by 18 to 2,241. There was no new death and 2 recoveries in the past 24 hours, leaving 61 fatalities and 2,068 fully recovered. It now has 112 active cases of COVID-19.

Globally, the virus has now infected more than 23,120,216 people, with over 803,201 reported deaths. Governments across the word halted flights, locked down towns and cities and urged people to stay at home at the peak of the virus’s spread, but there are now signs of easements in nations that have reined it in to help shuttered economies recover. Overall, around 15,713,254 patients of the 23.1 million+ infected have recovered thus far.