Pakistan on Tuesday reported 2,846 new infections of the novel coronavirus, raising to 209,337 the nationwide confirmed cases of the deadly disease.

The country continues to test far below its claimed capacity of 71,780—and significantly below the numbers proposed by global health experts—having only conducted 20,930 tests in the past 24 hours, a positivity ratio of 13.6 percent. Meanwhile, the number of cases being exported by Pakistan continues to increase, and Islamabad’s failure to curb the spread of the virus has been reflected in the country being slapped with travel bans from South Korea and the United Arab Emirates. The latter has said it would only resume flights from Pakistan once Islamabad establishes a testing laboratory for every traveler exiting the country.

Chief Minister Usman Buzdar over the weekend accused the opposition of “playing politics” over the coronavirus pandemic, claiming the government was ensuring the simultaneous protection of lives and livelihoods. The government has devised SOPs for cattle markets and collective sacrifice on Eidul Azha in a bid to curb the spread of the deadly virus during the festival.

On Tuesday, authorities reported 46 new deaths due to COVID-19, raising total fatalities to 1,727. The province also reported 723 new infections, raising confirmed cases to 75,501, against 27,147 recoveries. There are now 46,627 active cases of the virus in Punjab province.

The Sindh government on Monday announced it was planning to recruit 2,200 new doctors to help overcome the healthcare gap exposed by the coronavirus pandemic. It said that since so many healthcare workers had become infected with COVID-19, the new recruitment would help reduce the burden on the province’s healthcare facilities.

Adviser to the C.M. on Information Ajmal Wazir on Monday urged all opposition parties to unite with the government in the fight against COVID-19, adding that undue criticism was not helpful during the crisis. He told a press briefing that that the province was increasing its testing capacity in public-sector hospitals, and maintained that all precautionary measures were being expended to curb the spread of coronavirus.

The provincial government on Tuesday reported 13 new deaths, raising its death toll to 935. In the past 24 hours, its recoveries rose by 278 to 12,626, while its confirmed cases have increased by 337 to 26,115. There are currently 12,626 active cases of coronavirus in the province. 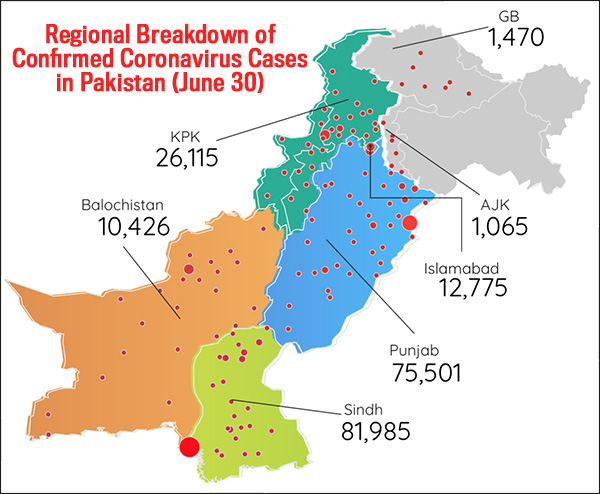 Provincial spokesman Liaquat Shahwani on Monday claimed that there had been a noticeable decline in new infections of COVID-19 in the province. He told a press briefing that the positivity ratio had decreased from around 24 percent to 18 percent in one week. He credited this decline to citizens adopting standard operating procedures issued by the government.

Confirmed cases of the novel coronavirus in the province on Tuesday rose by 50 to 10,426, with 3 new deaths raising total fatalities to 119. Overall, 4,197 patients have recovered from the virus, leaving 6,110 active cases of COVID-19.

Confirmed cases of the novel coronavirus in Gilgit-Baltistan rose by 28 on Tuesday to 1,470. Overall, the region has thus far reported 24 deaths and 1,117 recoveries, leaving 329 active cases.

In Pakistan-administered Kashmir, confirmed cases have increased by 16 to 1,065. The region’s death toll stands at 28 against 539 recoveries. It has 498 active cases of COVID-19.

Globally, the virus has now infected more than 10,412,343 people, with over 508,228 reported deaths. Governments across the world halted flights, locked down towns and cities and urged people to stay at home at the peak of the virus’s spread, but there are now signs of easements in nations that have reined it in to help shuttered economies recover. Overall, around 5,667,665 patients of the 10.4 million+ infected have recovered thus far.