Pakistan on Saturday reported 2,165 infections of the novel coronavirus after conducting 34,535 tests—a positivity ratio of 6.27 percent.

Punjab Education Minister Murad Raas has claimed that there is no need to close educational institutions en masse in light of the recent surge in the coronavirus pandemic. Talking to a private TV channel on Friday, he said that there should be no winter break, as has been advised by the National Command and Operation Center, and that if there were a need for school closures, it should only apply to areas where the positivity ratio was consistently high. 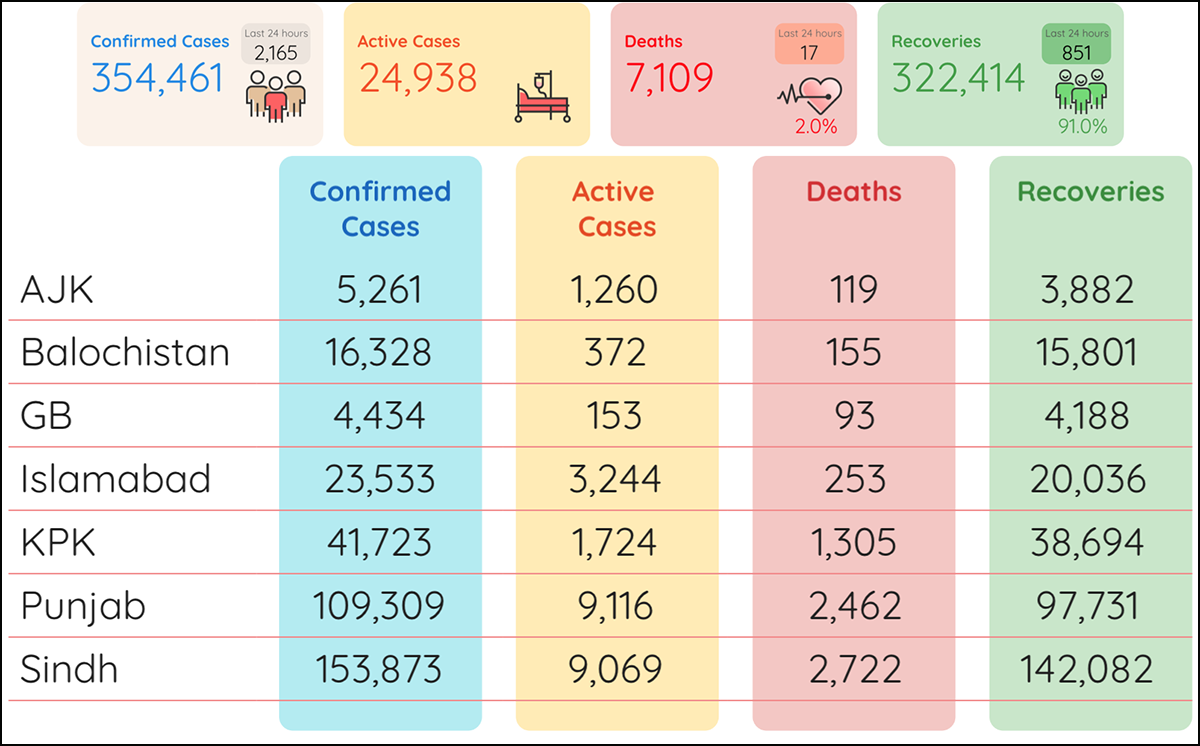 On Saturday, authorities reported 7 new deaths due to COVID-19, raising fatalities to 2,462. The province raised its confirmed cases to 109,309 with 487 new infections after conducting 12,006 tests. The province reported 39 new recoveries, leaving 97,731 fully recovered, and now has 9,116 active cases of the virus.

The province on Saturday raised its confirmed cases to 16,328 with 54 new infections after conducting 614 tests. There were no new deaths and 19 recoveries in the past 24 hours, leaving 155 fatalities and 15,801 recoveries. There are now 372 active cases of COVID-19 in the province.

Confirmed cases of the novel coronavirus in Gilgit-Baltistan on Saturday increased by 18 to 4,434 after conducting 312 tests. The region reported no new deaths and 5 recoveries, leaving 93 fatalities and 4,188 recovered. There are currently 153 active cases of COVID-19 in the region.

Globally, the virus has now infected more than 53,746,944 people, with over 1,309,408 reported deaths. Governments across the word halted flights, locked down towns and cities and urged people to stay at home at the peak of the virus’s spread, but have since eased restrictions to help shuttered economies rebound. With a second wave now emerging, countries with new spikes have started to re-impose movement restrictions. Overall, around 37,523,973 patients of the 53.7 million+ infected have recovered thus far.