The government over the weekend honored 86 overseas Pakistanis for their outstanding contributions in the fight against COVID-19. In a statement, Foreign Minister Shah Mahmood Qureshi said these were the “real ambassadors of Pakistan,” and included names of people who had worked tirelessly in various nations to help Pakistan and the world deal with the enormous health challenge.

Chief Minister Usman Buzdar on Sunday commended Prime Minister Imran Khan’s “smart lockdown” policy, saying it had succeeded in impeding the spread of the novel coronavirus in the country. He said the prime minister’s steps had been appreciated at an international level, and slammed opposition politicians for playing “negative politics” on the pandemic.

On Monday, authorities reported no new deaths due to COVID-19, sustaining fatalities at 2,182. The province also reported 56 new infections, raising confirmed cases to 95,447, while its recoveries have increased by 2,257 to 88,698. There are now 4,567 active cases of the virus in the province.

Despite multiple warnings by the provincial and federal governments that the threat posed by COVID-19 is not yet over, Islamabad’s decision to end all lockdown restrictions has resulted in violations of preventative measures in public places. Over the weekend, the Sindh government noted that large crowds swarmed the beaches of Karachi—just a week after lockdowns ended—with little to no usage of face masks or social distancing measures.

The provincial government has decided to reopen colleges with strict implementation of SOPs from today (Monday). Per the notification, all colleges would be allowed to open to settle administrative matters, including admissions. Only principals and five faculty members would be allowed on working days until the institutions are allowed to fully reopen.

The provincial government on Monday reported 1 new death, raising its death toll to 1,239. In the past 24 hours, its recoveries rose by 46 to 32,450, while its confirmed cases have increased by 62 to 35,215. There are currently 1,526 active cases of coronavirus in the province.

The provincial government has announced the re-opening of all government departments and outdoor patients departments at all state-run hospitals in the province from Monday (today). According to an official announcement, all government employees have been directed to attend their offices from Aug. 17 with strict observance of SOPs. The offices had been shut since March, when the province imposed a lockdown to prevent COVID-19 from spreading.

Confirmed cases of the novel coronavirus in the province on Monday rose by 61 to 12,295. Overall, 138 people have died and 10,956 patients have fully recovered from the virus, leaving 1,201 active cases of COVID-19. 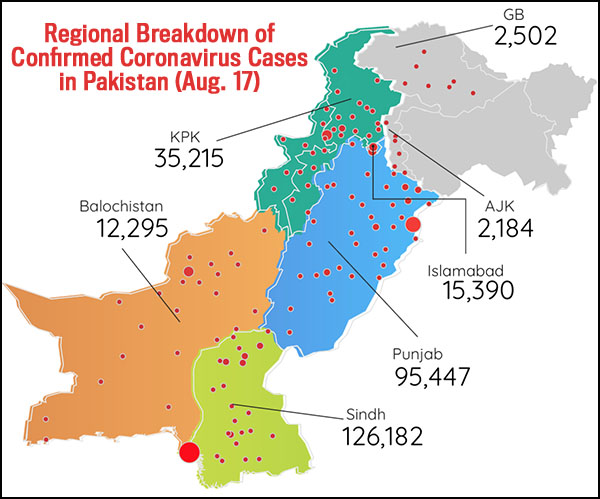 Islamabad on Monday raised its confirmed coronavirus cases by 12 to 15,390. There were no new deaths and 144 recoveries in the past 24 hours, sustaining death toll at 173 and increasing recoveries to 13,276, leaving 1,941 active cases.

Confirmed cases of the novel coronavirus in Gilgit-Baltistan rose by 16 on Saturday to 2,502. The region reported 1 new death, raising toll to 61, while its recoveries have increased by 19 to 2,133, leaving 308 active cases.

In Pakistan-administered Kashmir, confirmed cases have increased by 3 to 2,184. There were no deaths or recoveries reported in the past 24 hours, leaving 60 fatalities and 2,002 fully recovered. It now has 122 active cases of COVID-19.

Globally, the virus has now infected more than 21,826,450 people, with over 773,072 reported deaths. Governments across the word halted flights, locked down towns and cities and urged people to stay at home at the peak of the virus’s spread, but there are now signs of easements in nations that have reined it in to help shuttered economies recover. Overall, around 14,564,184 patients of the 21.8 million+ infected have recovered thus far.