Pakistan Reports Another 105 Deaths Due to COVID-19

Pakistan on Tuesday morning recorded 3,946 new infections of the novel coronavirus—it’s lowest since June 3—as tests conducted also dropped below 25,000 for the first time since June 15.

Authorities have started claiming that the “smart lockdown” currently being enforced in viral hotspots nationwide is already paying dividends, with the Punjab government claiming new cases had dropped from 2,538 last week to 1,523 this week. Health experts, however, have voiced caution, saying it is far more likely that reduced testing is responsible for the drop in infections, and it is too early to determine the efficacy of the lockdown.

In the same period, 2,013 patients were declared COVID-free, raising recoveries to 73,471. There are currently 107,868 active cases of COVID-19 in the country, with the National Command Operation Center reporting 3,236 of them are in critical condition.

Prime Minister Imran Khan, in a press briefing, reiterated that he would “never have imposed lockdowns” if the provincial governments had sought his guidance in March. He, once again, claimed that Pakistan’s economy could not sustain another lockdown and claimed the coming month would be “very, very difficult.”

The provincial health department on Monday recommended sealing seven major areas of capital Lahore, noting there had been a spike in COVID-19 infections there in the past week. A Punjab cabinet committee on coronavirus, and the Home Department, would give final approval.

According to the Health Department, the neighborhoods recommended for sealing have reported 3,613 coronavirus cases thus far, and comprise 96,223 houses and 233,000 families (1.69 million people).

On Tuesday morning, authorities reported 60 new deaths due to COVID-19, raising total fatalities to 1,495. The province also reported 1,365 new infections, raising confirmed cases to 68,308, against 19,580 recoveries. There are now 47,233 active cases of the virus in Punjab province.

The provincial government on Monday issued a notification to protect the jobs of people during the ongoing pandemic, ordering employers to refrain from firing their employees. It has warned of strict penalties to businesses that ignore this measure.

Adviser to C.M. on Information Ajmal Wazir on Monday said the North Waziristan-Ghulam Khan border had been opened for commercial activities and bilateral trade between Pakistan and Afghanistan on the orders of the prime minister to facilitate economic activities. Strict implementation of SOPs would be monitored at the Torkham and Ghulam Khan borders, he said, adding that pedestrian movement would be allowed one day a week. 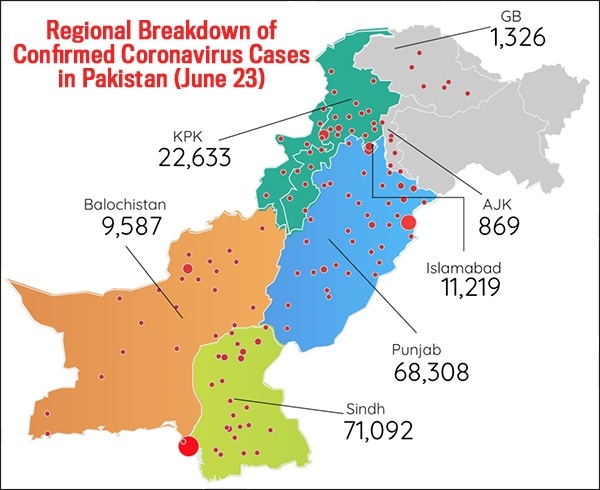 Spokesman Liaquat Shahwani on Monday said the province had thus far witnessed a 22 percent positivity rate in its testing. He said the fatality rate was now at 2 percent, adding that as more and more people adopted SOPs, new infections were decreasing. “It is heartening that there has been a zero percent fatality rate in infections of children aged under-11,” he said.

Confirmed cases of the novel coronavirus in the province on Tuesday rose by 112 to 9,587, with 2 new fatalities raising the total death toll to 104. Overall, 3,670 patients have recovered from the virus, leaving 5,813 active cases of COVID-19.

Confirmed cases of the novel coronavirus in Gilgit-Baltistan rose by 38 on Tuesday to 1,326. Overall, the region has thus far reported 22 deaths and 946 recoveries, leaving 358 active cases.

In Pakistan-administered Kashmir, confirmed cases have increased by 24 to 869. The region has thus far reported 22 deaths and 350 recoveries, leaving 497 active cases of the coronavirus.

Globally, the virus has now infected more than 9,188,360 people, with over 474,330 reported deaths. Governments across the world halted flights, locked down towns and cities and urged people to stay at home, but there are now signs of easements in nations that have reined in the virus’ spread to help shuttered economies recover. Overall, around 4,937,280 patients of the 9.1 million+ infected have recovered thus far.