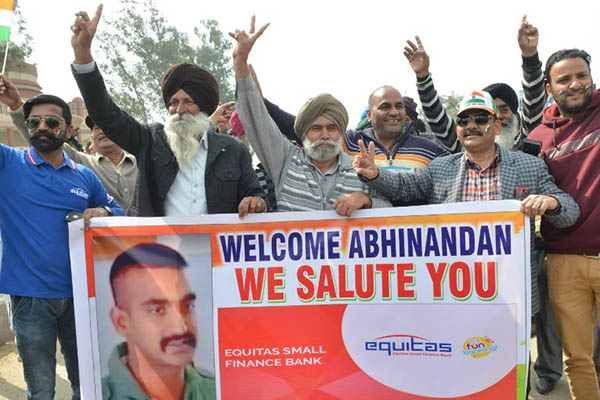 A pilot shot down in a dogfight with Pakistani aircraft returned to India on Friday, after being freed in what Islamabad called a “peace gesture” following the biggest standoff between the two countries in years. But fresh violence raged in Kashmir, with 11 people killed in the Indian-occupied part of the tinderbox territory, suggesting that the spike in tensions sparked by the death of 40 Indian soldiers in a suicide bombing last month may not be over.

Wing Commander Abhinandan Varthaman, downed on Wednesday over Kashmir—divided between the neighboring nations since 1947—crossed into India at the famed Wagah border checkpoint late on Friday, sporting a black eye from his ordeal.

Pakistan’s foreign ministry said he was “treated with dignity and in line with international law,” and that his release was “aimed at de-escalating rising tensions with India.”

Thousands of Indians, waving flags, singing and dancing patriotic songs, had gathered at the crossing point on Friday afternoon but the crowd dwindled after his release was delayed inexplicably by hours. Others also danced and shouted slogans in New Delhi.

The parents of handlebar-moustached Abhinandan were given a standing ovation by fellow passengers as they boarded a flight to Amritsar near Wagah to welcome their son. In India the experienced pilot’s release was seen as a diplomatic victory, but New Delhi warned that its military remained on “heightened” alert.

On Thursday and Friday both countries continued to fire barrages across the Line of Control (LoC), the de-facto border dividing Kashmir, with mortar fire killing four people on the Indian side. They included three members of the same family—a mother and two children—when a mortar shell pulverized their house in Poonch district late Friday, police said.

Indian troops also laid siege to a house in Handwara district in India’s only Muslim-majority state, believing they had killed two fighters inside. However one survived, a police official told AFP. Hours later, when security forces went in to retrieve the bodies the man emerged from debris and opened fire, killing four soldiers before he was shot dead.

“Influence of terrorists and terrorism has been curtailed and it is going to be curtailed even more. This is a New India,” Prime Minister Narendra Modi, facing a tough election due by May, said on Friday. “This is an India that will return the damage done by terrorists with interest,” he said.

After the pilot’s release he tweeted: “The nation is proud of your exemplary courage… Hail to the motherland!”

India’s junior foreign minister and former army chief, Vijay Kumar Singh, tweeted that the “welcome” release of the pilot was “the first of many steps that #Pakistan must take to reinforce their commitment to peace.”

Kashmir has been divided between India and Pakistan since the end of British colonial rule. Both claim it in full and have fought two wars over the Himalayan territory. India has half a million troops in the part it administers, with separatists—backed by Islamabad, according to New Delhi—fighting for independence or a merger with Pakistan.

Tens of thousands of people, mostly civilians, have died since a revolt that broke out in 1989. Last year was the deadliest in a decade with almost 600 killed, monitors say, sparking anger among locals.

“Poor people are getting killed and their homes are destroyed… We need peace,” Nagina Bano, one of 300 locals who attended the funeral on Friday for a woman killed in the cross-border bombardment, told AFP.

A civilian was also killed during protests in Indian-Occupied Kashmir, police told AFP.

Alarming the international community, tensions escalated after the Feb. 14 suicide bombing in Indian Kashmir, with the attack claimed by a Pakistan-based militant group. Twelve days later Indian warplanes launched a strike inside undisputed Pakistani territory, claiming to have hit a militant camp.

An infuriated Islamabad denied casualties or damage, but a day later launched its own incursion across the LoC. That sparked the dogfight, which ended in both countries claiming they had shot down each other’s warplanes, and Abhinandan’s capture. While New Delhi was forced to confirm the downing of its plane due to Abhinandan’s capture, Islamabad vehemently denies it has lost any aircraft.

The tensions, nevertheless, prompted Pakistan to close down its airspace, disrupting thousands of travelers worldwide. Most of its major airports reopened on Friday.