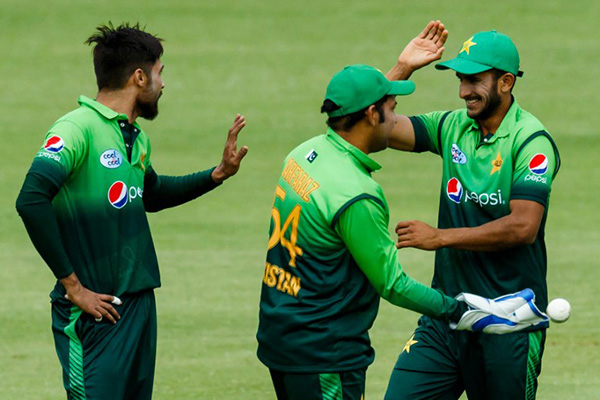 Pakistan captain Sarfraz Ahmed hailed “a great performance” after his team sealed a series win by strolling to a nine-wicket victory over Zimbabwe in the third one-day international on Wednesday.

Seamer Faheem Ashraf was the pick of a bristling Pakistani attack, taking a career best five for 22 as the hosts were all out for just 67.

Opener Fakhar Zaman then continued his good run of form to see Pakistan home in the 10th over with an unbeaten 43. “First of all, a great performance,” said Ahmed. “Ashraf is getting better day by day. He’s an all-rounder, and we need him.”

Once again Zimbabwe won the toss and opted to bat first, but their slide began as early as the second over. Prince Masvaure, on his debut, was caught out by a lifter from Usman Khan and Zimbabwe were under immediate pressure at 1 for 1.

The hosts were wobbling at 26 for 3 when Ashraf came on as first change in the 10th over, and he quickly had Peter Moor brilliantly caught in the slips by Babar Azam before trapping Chamu Chibhabha leg before wicket with a skidding full delivery. He then had Elton Chigumbura caught behind and bowled Ryan Murray as Zimbabwe slipped to a perilous 54 for 8.

Tailenders Wellington Masakadza and Blessing Muzarabani clung on for seven overs, but leg-spinner Shadab Khan eventually removed Muzarabani with a googly and Ashraf then returned to end the innings with a pinpoint yorker.

Zimbabwe’s 67 was their lowest ever total against Pakistan, and the lowest score ever recorded in 78 ODIs at Queens Sports Club. “I try to bowl in good areas and a stump to stump line,” said Ashraf. “Our bowling coach [Azhar Mahmood] puts in a lot of effort. He’s really helped us to get better, and a lot of credit for my first five-for in international cricket goes to him.”

In response, Pakistan lost Imamul Haq to the first ball of the chase, gloving a quick bouncer from Muzarabani through to wicketkeeper Ryan Murray.

Zaman was also struck on the grille of his helmet by a short one from Ngarava, but he quickly recovered his composure and ended the match in a flurry of boundaries. He struck seven fours in the space of 10 deliveries to seal the match and give Pakistan an unassailable 3-0 lead in the series.

“A bit of a disaster really,” said Zimbabwe captain Hamilton Masakadza. “Today we’ve gone quite a long way backwards, but these things happen in cricket. As a batting group, we have a lot of hard questions to ask ourselves,” he said. “The main thing is to stay positive, because once you go in that direction and get down on yourself it’s very hard to come back.”

The teams will play two further matches, on Friday and Sunday, at the same ground.