Pakistan to Set Up Polio Immunization Points at Airports 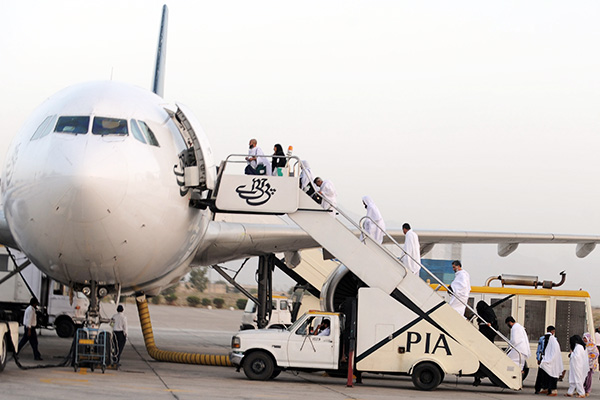 Mandatory immunization counters for all travelers will be established as per WHO recommendations.

Pakistan will set up mandatory immunization points at airports to help stop its polio outbreak spreading abroad, officials said Tuesday, though a health minister said the move played into the Taliban’s hands.

The World Health Organization warned on Monday that the crippling disease has re-emerged as a public health emergency—with the virus currently affecting 10 countries worldwide and endemic in three including Pakistan—and urged infected nations to implement vaccine requirements for all international travel.

Saira Afzal Tarar, state minister for Health Sciences Regulation and Coordination, said officials had yet to work out the details of when and how the policy would be implemented. “Passengers traveling abroad now should not worry about it,” she said, adding that the government would hold a meeting on Wednesday with provincial ministers and health officials to discuss the vaccination program, and had already reached out to religious scholars.

But she accused the WHO of playing into the Taliban’s hands, saying the health body’s recommendations had isolated Pakistan and would make life harder for ordinary Pakistanis—thereby helping the militants achieve their goals. “By recommending travel restrictions on Pakistan, the WHO has strengthened those forces who actually banned polio drops,” she said.

The Taliban and other militants violently oppose polio vaccination campaigns—seeing them as a cover for foreign spying—and regularly attack immunization teams, killing some 56 people since December 2012. Widespread public fears that the vaccine leads to infertility have also contributed to a re-emergence of the disease in Pakistan.

Militants’ opposition to immunization has increased since Dr. Shakeel Afridi helped the CIA track down terror chief Osama bin Laden in 2011 through a fake vaccine project. Tarar blamed the surge of cases in Pakistan mainly on “a reaction to the Afridi case.”

The WHO had called on Pakistan, Cameroon and Syria—seen as posing the greatest risk of exporting wild poliovirus—to ensure all residents and long-term visitors receive a polio vaccine between four weeks and a year before traveling abroad. For urgent travel, at least one vaccine dose should be given before departure, according to the emergency committee, which also called for all travelers to be given certificates proving they have been immunized.

Government spokesman Sajid Ali Shah said it had not yet been decided whether long-term non-Pakistani residents would also be subjected to the new rules.

Last month officials announced they would begin administering polio drops to children at security checkpoints in the country’s tribal belt.

Polio—a crippling and potentially fatal viral disease that mainly affects children under the age of five—has come close to being beaten as the result of a 25-year effort.

Pakistan to Allow Private Firms to Set Own...