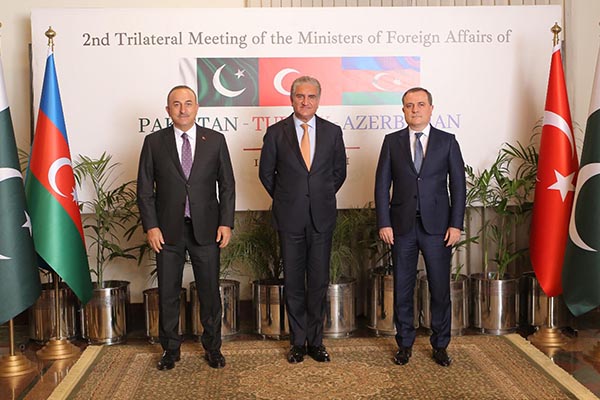 The foreign ministers of Turkey, Pakistan and Azerbaijan at their 2nd Trilateral meeting in Islamabad. Courtesy PID

Pakistan, Turkey, and Azerbaijan on Wednesday agreed to “enhance joint efforts on combating Islamophobia, discrimination and persecution of Muslim minorities, in particular at the regional and international fora,” according to a declaration signed by the foreign ministers of all three nations.

He said the three officials had discussed “the systemic and gross human rights violations and crimes against humanity committed against Muslim minorities, including the rising trend of Islamophobia,” as well as the promotion of education and Islamic culture. Underlining that Pakistan had close fraternal relations with both Turkey and Azerbaijan, he said their discussions had also revolved on cooperation in trade, investment, and other areas such as rail, road, and air links.

Addressing regional peace and stability, which he said all three nations desired, Qureshi said the people of Kashmir were also “grateful for the support of Turkey and Azerbaijan.” The Islamabad Declaration between the three nations “reaffirmed the most recent OIC resolution 10/47-Pol on the Jammu and Kashmir dispute adopted in Niamey in November 2020 and Communiqués of OIC Contact Group on Jammu and Kashmir and expressed deep concern over the unilateral actions of Aug. 5, 2019, continuing grave human rights violations in and efforts to change the demographic structure of Jammu and Kashmir, and reiterated their principled position for a peaceful settlement of the Jammu and Kashmir dispute in accordance with the relevant U.N. Security Council Resolutions.”

“Pakistan and Turkey need to increase combined trade volume, [currently it] is only $800 million,” said Turkish Foreign Minister Mevlüt Çavuşoğlu. “We’re increasing our defense cooperation with Pakistan and we will continue to support and promote security, stability, and prosperity.”

He reiterated that Turkey supported resolving the Kashmir dispute per U.N. resolutions, adding Ankara “expresses heartfelt solidarity with Kashmiris brothers.” He also thanked Pakistan for conferring the Hilal-e-Pakistan award on him, terming it “a sign of brotherhood.”

In a subsequent post on Twitter, he said Pakistan was the “second home” of Turks. “We are in Islamabad to further our excellent relations [and] will proudly carry the Hilal-e-Pakistan Award,” he said. “Turkey-Pakistan Dosti Zindabad.”

Azerbaijani Foreign Minister Jeyhun Bayramov referred to the Nagorno-Karabakh region—a source of conflict between Azerbaijan and Armenia—inviting both Pakistan and Turkey to invest in the “liberated territories.” He also thanked both nations for their support to Azerbaijan during the Nagorno-Karabakh war. “The common values of our three countries are religion and culture,” he said.