Pakistan Turns to China For Development 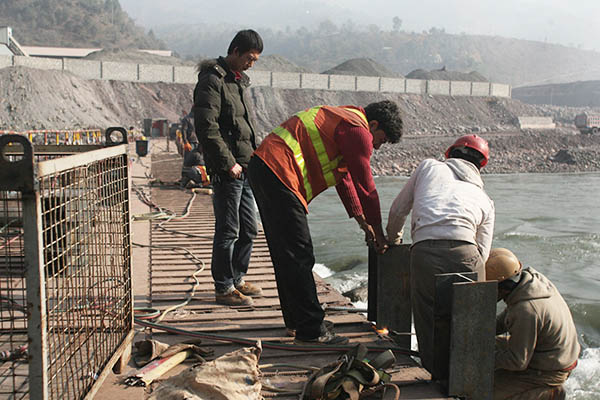 Analysts say China’s investments in Pakistan are a chance to boost trade and gain a cheaper workforce to satisfy domestic demand.

Pakistan’s inauguration of construction on its largest nuclear power plant on Nov. 26 is the latest example of its increasing reliance on big-money Chinese infrastructure projects.

Cash-strapped Pakistan, plagued by a bloody homegrown Taliban insurgency, is battling to get its shaky economy back on track and solve a chronic energy crisis that cripples industry. With its ties with the U.S. unpredictable and held hostage to populist sentiment, Islamabad has sought Beijing’s help to fix some of these problems. Chinese companies employing over 10,000 Chinese engineers and workers are working on more than 100 major projects in energy, roads and technology in Pakistan, according to officials, with an estimated $18 billion expected to be invested in the coming years.

“Some projects are being done by the government, then most of the projects are being done by the Chinese companies, by the provinces and also with the state enterprises and authorities,” says Ahsan Iqbal, federal minister for planning and development. “In the energy sector, Chinese engineers are building up to 15 power projects that include hydel (hydroelectric), thermal and nuclear plants.”

Pakistan faces an electricity shortfall of around 4,000 megawatts in the summer, leading to lengthy blackouts that make ordinary people’s lives a misery and have strangled economic growth.

To combat the crisis, Pakistan has sought Chinese help in building power generation projects, including nuclear, across the country. Aside from the 2,200 MW project near Karachi launched by Prime Minister Nawaz Sharif, Chinese companies built two of Pakistan’s three operational reactors.

Chinese engineers are also busy constructing a 969 MW hydropower project in Kashmir. They have also committed to generate 6,000 MW of electricity from coal and wind in Sindh province.

But the cooperation goes beyond energy.

Visiting in May during his first overseas trip after taking office, Chinese Premier Li Keqiang linked growth in his country’s restive west with that in Pakistan, saying the two sides wanted to create an “economic corridor” to boost development. The concept involves improving road and rail networks to link China through Pakistan to the Arabian Sea and planning minister Iqbal said its benefits would extend to other neighboring countries.

“The biggest flagship project is going to be the economic corridor. I hope with its completion, we will be able to create opportunities not just for China and Pakistan but for the entire region,” he said. “If the economic corridor is constructed, trade between China and India can also take place from this corridor. Similarly, trade between China and Central Asia and also between India and Central Asia can take place,” Iqbal said.

In January the Pakistani cabinet approved the transfer of Gwadar port, strategically located in Balochistan province, to a Chinese state-owned company. Once the road network is improved, Gwadar will slash thousands of kilometers off the distance oil and gas imports from Africa and the Middle East have to be transported to reach China.

After six years of a bloody Taliban insurgency, and threat of expat workers being kidnapped and beheaded by militants, many foreign firms are wary of investing in Pakistan. Chinese engineers on construction sites are guarded at all times by armed policemen, however, and are happy with their time in Pakistan.

“Pakistani people are very friendly with Chinese. That is why I am here since last three years and I will spend some more years over here,” said Wang Yanjun, supervising a road-building project in Muzaffarabad, the main town in Pakistan-administered Kashmir. “They provide respect and support to Chinese, so cooperation between China and Pakistan is increasing. I think we will do much more development projects in future than now.”

Another engineer, Wang Songqiang of China International Water and Electric Corporation, is looking after the construction of a shopping center in Muzaffarabad. “Our company is working in 38 countries, but we have special feelings while working here in Pakistan,” he said.

Pakistan and China presently have annual bilateral trade of around $12 billion and are trying to take it to $15 billion in the next three years, though Iqbal said Sharif is dreaming of doubling even this volume.

For China, investing in Pakistan’s crumbling infrastructure is a chance to boost trade but also about using its southwestern neighbor’s workforce as it seeks to keep prices down while satisfying growing domestic demand.

“Some industries are becoming very costly in China and their government feels they can get cheaper labor in Pakistan for those factories, which includes electronics and autos,” said Ahmed Rashid Malik, senior research fellow at the Institute of Strategic Studies, Islamabad. “For that they need energy in Pakistan and investing in Pakistan’s energy sector can prove beneficial for China in future.”

But there are dissenting voices, raising worries about possible corruption in the somewhat opaque deals struck between Pakistani government departments and provincial administrations and Chinese firms. “The capacity of Pakistani bureaucracy and the issue of transparency in this whole development plan is a source of concern for me,” said Senator Mushahid Hussain, chairman of the Pakistan China Institute and a strong advocate of Pakistan-China friendship. “There have been allegations of corruption against them in the past, so it’s a challenge for us to utilize this opportunity which came to us through Chinese cooperation,” he added.