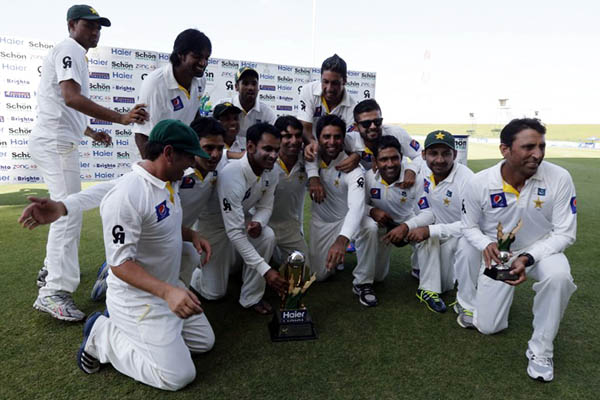 Pakistan achieved their first series win over Australia in 20 years with a 356-run win in the second Test in Abu Dhabi on Monday, taking the two-match series 2-0.

The win lifts Pakistan to number three in the International Cricket Council’s Test rankings, behind number one South Africa and Australia.

Spinners Zulfiqar Babar (120/5) and Yasir Shah (44/3) rocked Australia once again for 246 in the second innings soon after lunch at Sheikh Zayed Stadium.

Pakistan won the first Test by 221 runs in Dubai.

Pakistan had taken a big step forward after scoring a mammoth 570/6 declared in their first innings and getting a 309-run lead by dismissing Australia for 261. That never allowed Australia to stage a comeback and avoid series defeat for the first time since losing 1-0 in Pakistan in 1994.

The defeat was Australia’s third worst in all Test cricket behind their 675-run loss against England in Brisbane in 1928 and by 408 against the West Indies at Adelaide in 1980.

In contrast Pakistan registered their biggest win in terms of runs, beating their 341-run victory over India at Karachi in 2006.

“It’s really an honor for me to lead this side, the way everybody played,” said Pakistan captain Misbah-ul-Haq. “Every individual performed and I’m really happy about that. I can’t describe my feeling. We were working really hard and playing good cricket but not winning, so it’s really good.”

“And we have been outplayed, unfortunately,” he said. “It’s been the track record of Australian cricket [in Asia] for a long time, unfortunately.”

It was Australia’s sixth Test defeat in a row in Asia after they lost 4-0 in India early last year.

Pakistan had to fight hard in the morning session as Steven Smith defied Pakistan during his resolute knock of 97, but once Smith departed, leg-before by Shah, Australia lost their last four wickets for the addition of just eight runs. Smith added an invaluable 107 for the fifth wicket with Mitchell Marsh, who fell after scoring 47.

Smith missed a sharp turner from Shah who also bowled Mitchell Johnson and Mitchell Starc to finish with 12 wickets in the series. Babar had Nathan Lyon caught for his second fifth wicket haul, following up his first in the first Test in Dubai.

Babar finished with 14 wickets in the series as Pakistan did not miss ace spinner Saeed Ajmal’s absence who is suspended due to illegal bowling action.

Before lunch Smith batted resolutely, using his feet against the spinners during his 204-ball knock and hitting a dozen boundaries. Smith reached his eighth Test fifty with two boundaries off spinner Babar, who failed to add to his three wickets on Sunday.

Marsh, who top-scored with 87 in Australia’s first innings, played Pakistan’s pace-cum-spin attack confidently and he and Smith added 55 runs in the first hour. But Mohammad Hafeez provided the breakthrough when he had Marsh caught by Asad Shafiq off an uppish flick. His 130-ball innings included six boundaries. Hafeez finished with 2-38.

The win is also special for skipper Haq who equaled the most wins record by a Pakistani captain with 14. Imran Khan and Javed Miandad also won 14 Tests as captains.

Haq, declared man-of-the-match, set the world record for the fastest half-century and equaled the feat of fastest century in all Test cricket during his 101 not out on Sunday, capping a memorable Test match. Younis Khan was named man of the series for his 468 runs in two Tests.