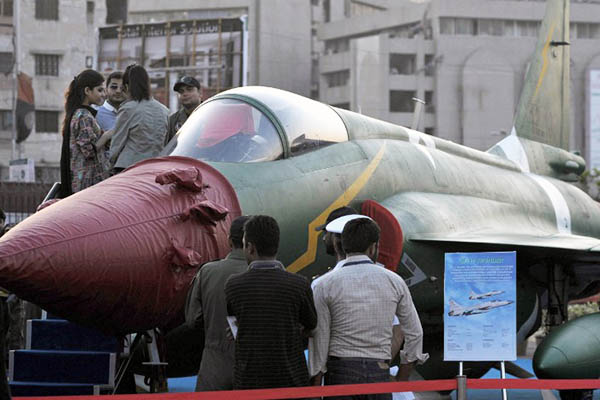 Air Force spokesman confirms order, but declines to give details of client, number of aircraft or date of delivery.

Pakistan has won the first-ever order for its JF-17 Thunder jet fighter, an Air Force spokesman said Monday, as the revamped plane dazzled crowds at the Paris Air Show.

Islamabad has been without a buyer for its first homemade jet, which was designed with the help of close ally China, for several years. Commodore Syed Muhammad Ali, spokesman for the Pakistan Air Force, confirmed an order for the plane had been finalized. However, he declined to give any more details, citing sensitivities for not naming the client, the number of aircraft or the date of delivery.

The latest model, which is capable of Mach 2.0 (twice the speed of sound) with an operational ceiling of 55,000 feet, roared over the crowds on the first day of the Paris Air Show soon after the confirmation. A report on the aviation website Flightglobal.com quoted another senior officer, Air Commodore Khalid Mahmood, as saying the sale had been made to an “Asian country” and the delivery would take place in 2017.

Pakistan’s large and well-funded military has long been a major importer of defense equipment, particularly from China. But Islamabad is hoping the updated JF-17, along with Pakistani-made tanks and surveillance drones, will help increase military exports and bring in much-needed foreign exchange.

Analysts say the plane’s design and construction has generally been a success, and it has been promoted primarily on cost, which is likely to be substantially less than the $16-18 million price of a U.S.-made F-16.

However, a number of factors have prevented it from finding buyers. “Any country entering the defense market will find it’s very, very crowded,” said James Hardy, Asia-Pacific editor for IHS Jane’s Defense Weekly in London. “No one has a bad word to say about the JF-17. It’s very good at what it’s designed to do—as a low-cost, multi-role aircraft. But there are obstacles.”

Some of those are political and logistical.

NATO countries are not keen to buy a plane that won’t work easily alongside jets from its U.S. and European allies. That may be why a mooted deal with Bulgaria has failed to make progress. Myanmar was considering a purchase, but may have backed away as its relations with China turned frosty in recent months.

Pakistan also faces tough financial realities, Hardy added. “It is up against countries that can provide many sweeteners,” he said, citing France’s shrewd deal with Egypt in which it secured the sale of 24 Rafale fighters by underwriting loans to pay for them. “And the JF-17 is not as proven,” he added.

Even Pakistan has yet to use the fighter jet, still preferring to deploy its ageing fleet of F-16s in operations against militants in its restive northwest.

But Malik said Pakistan noted that three squadrons were now using the plane, with a fourth due by the end of the year, and it had been inducted into the country’s elite fighter training school “so it could be truly employed for any combat.”

Pakistan historically depended on U.S. imports during its wars with India. After the Cold War ended Pakistan began to deepen defense and economic ties with ally China, culminating in the test flight of the jet’s prototype in Chengdu in 2003.

The Pakistan Aeronautical Complex (PAC) just west of Islamabad is capable of turning out 25 of the aircraft per year. Pakistan has never revealed the full sales price, which is always complicated for fighter jets given the large amounts of maintenance service and potential add-ons that can come with it.

Having unveiled the second generation JF-17 last year with improved avionic systems, air-to-air refueling capability, additional weapons capability, PAC is already working on the third, with rumors it will add a second seat, which is popular with international buyers.

The Paris Air show runs until Sunday, with the final three days open to the public.