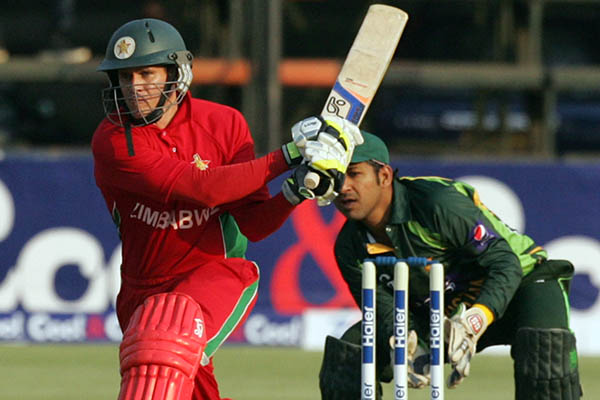 Ahmed Shehzad and Shahid Afridi helped Pakistan secure a comfortable victory in the first Twenty20 international that opened their tour of Zimbabwe on Friday.

Shehzad’s measured 70 allowed Pakistan to post a strong total of 161 for five, before Afridi snubbed out Zimbabwean resistance with three wickets to secure a 25-run victory.

Although Zimbabwe had improved their play since losing a recent one-day series against India 5-0, they let things slip in the field midway through the Pakistan innings and also lost their way after a promising start with the bat.

Shehzad’s patience up front proved key to the match as he saw out a tricky opening period when Pakistan lost Nasir Jamshed and captain Mohammad Hafeez to Tendai Chatara, before slowly taking control against Zimbabwe’s other seamers.

“Early on it was doing a bit. They bowled a good channel and that’s why they picked up a couple of wickets, but after six overs the ball was coming on nicely and I was able to maneuver the ball,” Shehzad said. The opener took 17 runs off Elton Chigumbura’s first over to put the pressure back on Zimbabwe, and shared in a 55-run stand with debutant Sohaib Maqsood.

Shehzad struck six fours and a six in his 50-ball innings before he was eventually caught on the boundary off the bowling of Shingirai Masakadza.

Afridi ensured that Pakistan finished strongly, hitting 23 not out from 16 deliveries, and then made key breakthroughs in the Zimbabwean innings in claiming figures of 3 for 25.

The home side started brightly with a 53-run opening stand between Hamilton Masakadza and Vusi Sibanda, but their inability to accelerate from a solid base meant that they never really threatened to achieve their target.

Afridi picked up the wickets of Sibanda and Timycen Maruma after labored innings by both batsmen, and also dismissed the dangerous Chigumbura cheaply.

Although Zimbabwe captain Brendan Taylor came in at number three and finished unbeaten, he was often starved of the strike as he faced just 30 balls in top scoring with 32.

Malcolm Waller’s late salvo saw him take a six and a four off Saeed Ajmal’s final over, but with too much to do Zimbabwe finished well short of the line.

“We always know that once we score 150-plus, it will be tough for the opposition to score the runs with our good bowling side,” Hafeez said.

The two teams will face off again at the same venue in the second and final Twenty20 international on Saturday.