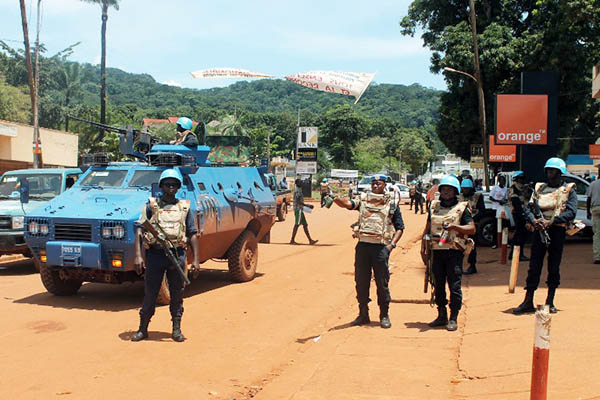 A U.N. peacekeeper from Pakistan was killed on Thursday in the Central African Republic during a flare-up of violence engulfing the capital of Bangui after months of relative calm.

Another soldier was severely wounded during the ambush on a joint Pakistani-Bangladeshi convoy and seven others suffered slight injuries, U.N. officials said. It was the first peacekeeper death of the mission that deployed last month in the Central African Republic, taking over from African-led troops that were sent after a March 2013 coup plunged the country into bloodshed and chaos.

The head of the U.N. mission, Babacar Gaye, strongly condemned the ambush. “This crime against the U.N. peacekeepers, who are here to help the people of the Central African Republic, is unacceptable, and the perpetrators will be held accountable and brought to justice,” he said.

Bangui has been rocked by two days of violence pitting the city’s Muslim and Christian populations against each other, leaving at least seven people dead and many dozens wounded, according to U.N. sources in Bangui.

The fresh violence was apparently ignited by a grenade attack in a Bangui street blamed on a Muslim assailant on a motorbike, followed by the murder of a taxi driver allegedly by Muslim gunmen who set fire to several houses. The U.N. mission chief said his forces would take “robust action” to prevent “a very difficult situation from spiraling out of control.”

The death of a U.N. peacekeeper in Central African Republic comes amid heightened concern over the U.N. mission in northern Mali where a wave of attacks have killed 31 peacekeepers since July last year.

News of the attack in the Central African Republic came after commanders briefed the U.N. Security Council on the growing security threats they face on the ground. U.S. Ambassador Samantha Power described the U.N. mission in Mali as “the most dangerous mission in the world for U.N. peacekeepers.”

“You are in a terrorist-fighting situation without an anti-terror mandate,” Power told the mission commander General Jean Bosco Kazura.

The U.N.’s 130,000 troops, police and civilian staff serving in missions worldwide are being drawn into more complex conflicts while being tasked with enforcing fragile peace deals. After the latest attack on a U.N. base in northern Mali, the country’s foreign minister, Abdoulaye Diop, told the Security Council that it should send a rapid-reaction force to help end the attacks on peacekeepers.

Such a force set up in the Democratic Republic of Congo, pairing government soldiers with U.N. troops, managed to beat back some of the myriad groups of rebels roaming the east.