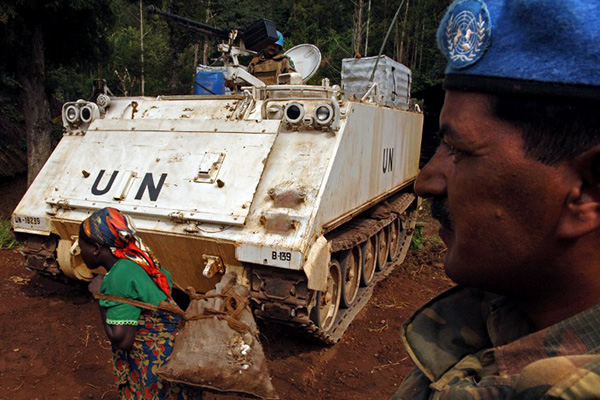 Unidentified assailants killed a Pakistani peacekeeper deployed in the Democratic Republic of Congo in an ambush on Tuesday, the United Nations announced.

U.N. Secretary-General Ban Ki-moon was “appalled” by the latest attack on U.N. peacekeepers and an investigation has been started, said spokesman Martin Nesirky. The attack was staged in South Kivu province on a U.N. mission military convoy, he added.

Various armed groups operate in South Kivu but it is not a stronghold of the M23 group, which launched an offensive against DR Congo government forces and U.N. peacekeepers in North Kivu province late last year.

Ban “condemns in the strongest terms the killing of a Pakistani peacekeeper in this attack. He recalls that the killing of peacekeepers is a war crime that falls under the jurisdiction of the International Criminal Court,” said his spokesman. The U.N. leader “offers his sincerest condolences and sympathy to the family of the victim, and to the government of Pakistan.” Ban called on the DR Congo government to “bring the perpetrators of this crime to justice,” Nesirky added.

Pakistan is a key contributor—with over 3,000 troops—to the U.N. force in DR Congo, officially known as MONUSCO, which is one of the biggest in the world with more than 17,750 troops and military observers and 1,400 police. The U.N. Security Council voted in March to create an additional intervention brigade of more than 2,500 troops in eastern DR Congo to take on armed groups such as the M23. The special force, the first to be given an offensive mandate, is expected to start deploying in coming weeks and will be made up of troops from South Africa, Malawi, and Tanzania.