Pakistanis Rage as Petrol Crisis Brings Cars to a Halt 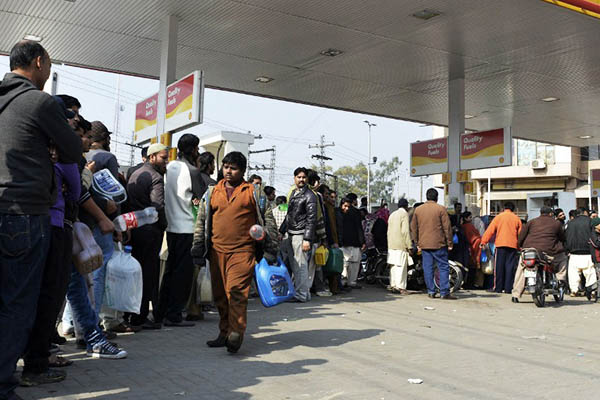 P.M. Sharif forces petroleum minister to apologize and assures public shortage will be resolved within a week.

Prime Minister Nawaz Sharif on Monday expressed extreme displeasure over Pakistan’s severe petrol shortage, forcing the petroleum minister to apologize for a crisis that has brought parts of the nation to a standstill.

The shortage began last week, first hitting Punjab province and the capital Islamabad, and spreading Monday to Khyber-Pakhtunkhwa province and parts of the country’s biggest city, Karachi. Affected areas ground to a halt, taking many buses off the roads and prompting angry scuffles at petrol stations, with tempers fraying as people waited in long queues for fuel. Some filling stations were forced to close.

“The prime minister showed his extreme displeasure over the difficulties being faced by the people due to non-availability of fuel,” Sharif’s office said in a statement after he led a high-level meeting on the crisis.

Anger is growing over the shortage amongst Pakistanis—who already have to deal with chronic power cuts that can see them struggle without electricity for 12 hours a day or more—at a time of a global glut in oil supplies. Solving Pakistan’s energy crisis was a key campaign pledge for Sharif in the run-up to the 2013 general elections, and the shortage is heaping fresh pressure on his government.

The prime minister suspended four senior officials on Saturday over the crisis and has ordered an enquiry, his office said.

Petroleum Minister Shahid Khaqan Abbasi on Monday apologized for the shortage, telling a press conference the situation had left him “ashamed” and pledging it would be resolved within “days.” The petrol supply has been increased by 30 to 50 percent, Abbasi added.

“I’ve been waiting in the queue for three hours,” complained taxi driver Iqbal Khan, stuck in a queue of hundreds of vehicles in Islamabad’s G-11 neighborhood. “Where will we go when there is no electricity and no petrol? Better that this government resign.”

Compressed natural gas (CNG) is widely used as fuel by Pakistani motorists as a cheaper alternative to petrol. Pakistan closed down CNG stations in parts of the country at the beginning of winter because of a separate shortage of the gas, to help conserve supplies for people using it to cook and heat their homes. To ease the pressure on petrol stations, the minister said that CNG stations have been opened in Lahore and Karachi.

They should know that Petroleum demand will increase due to stoppage of CNG. They should increase petrol supply before stopping CNG. This is a lame excuse. Government should fix the problems rather that indulging themselves in dirty politics.

Our govt don’t care about us.They are doing just dirty politics. mian saab suspended some burro crates but he says nothing to his patrol em minister.

While we are at it, could these burro crates be given judicial immunity to spill the beans on what happens to the money generated by differential pricing when cheaper bought petrol is sold at higher rates? Is there a transparent mechanism to ensure this money goes back to consumers not into the pockets of folk running the government?

govt should have to work on it immediately

Can someone please explain the rise in PSO share price during the crisis when the company was technically bankrupt? Who bought those shares?