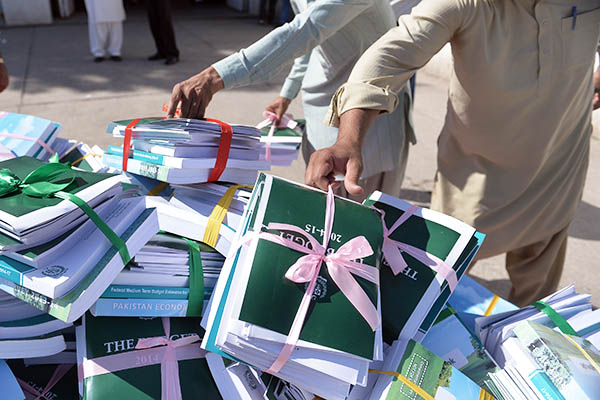 Copies of the federal budget arrive at the National Assembly. Aamir Qureshi—AFP

Islamabad on Tuesday announced an 11 percent increase in its military budget as it grapples with an ongoing Taliban insurgency, and forecast economic growth of 5.1 percent in the next financial year.

Finance Minister Ishaq Dar told Parliament in his budget speech that funding for the military would pass a little over $7 billion in the next year. Pakistan has for the past decade fought a homegrown Islamist insurgency that has claimed thousands of lives. Its powerful Army has traditionally commanded a major share of the budget as a counter to rival India, with whom it has fought three wars.

Dar told Parliament that the government would provide “all necessary resources” to the armed forces, despite efforts to rein in government spending.

Pakistan is also gripped by a chronic energy crisis, which has put a brake on industrial productivity, and is struggling to control inflation, currently at 8.6 percent. Nevertheless, a strong performance in some sectors such as construction allowed the economy to grow 4.1 percent in the last year—the first time a growth rate of over 4 percent has been achieved in six years.

Last September, the International Monetary Fund said it would give Pakistan a three-year aid package of $6.7 billion to replenish the country’s foreign exchange reserves and finance infrastructure projects. In exchange, Islamabad was asked to adopt an austerity package and implement fiscal reforms in a country where only around one percent of the population pays tax.

The government expects this year’s tax revenues to show a 21 percent increase on last year, Dar said. “For 2013-14, the gross revenue receipts of the federal government are estimated at Rs. 3,420 billion compared to the revised figures of Rs. 2,837 billion for 2012-13, showing an increase of about 21 percent,” Dar said in his budget speech.

The government is implementing a string of reforms to boost tax revenues, he added, including widening the proportion of Pakistanis who pay tax, simplifying tax procedures and targeting corruption. Dar proposed a new tax on weddings and other functions that take place in hotels, clubs, marriage halls and restaurants.