The Government of Pakistan, through its official COVID-19 portal, on Monday reported that the total number of confirmed coronavirus cases in the country had hit 3,277, with 50 deaths and 257 full recoveries.

According to the statistics available on the dashboard, the country has seen a massive uptick of 397 cases in the 24 hours between 9 a.m. on Sunday and 9 a.m. on Monday. The majority of the new cases have been reported from among Tablighi Jamaat members at Raiwind, where 484 people have tested positive for the disease so far.

In Punjab province, according to Chief Minister Usman Buzdar, there have thus far been 1,493 confirmed cases of the virus. Apart from the 484 Tablighi Jamaat members, 309 are from among returning Iranian pilgrims, while 49 are from among prisoners in jail. The highest number of cases in the province—discounting Raiwind and pilgrims—has been reported from provincial capital Lahore, 290. Gujrat and Rawalpindi follow with 93 and 58, respectively. The province has reported 15 deaths and 25 full recoveries thus far. It has conducted 19,232 tests thus far. 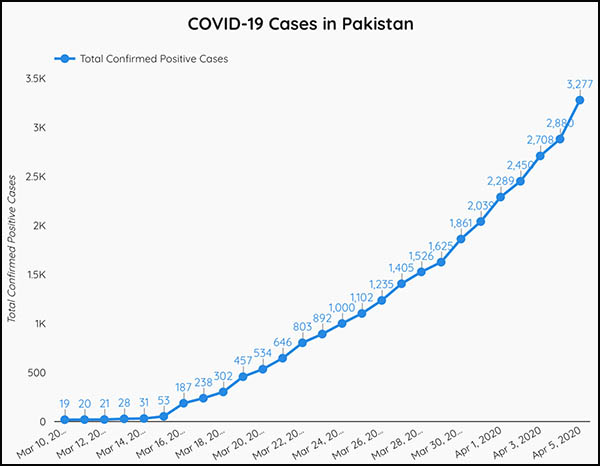 In Khyber-Pakhtunkhwa, which is currently working to ramp up testing to identify and isolate clusters of the disease as per World Health Organization guidelines, there have been 15 confirmed deaths from the coronavirus from among 340 cases. Overall, the province has conducted 2,466 tests, with 48 full recoveries.

Sindh province, which had taken the initial lead in testing and preventative measures to halt the spread of COVID-19, appears to have started lagging. The province has not updated its data since 8 a.m. on Sunday (a gap of more than 24 hours), at which point it had tested 8,931 people and reported 881 confirmed COVID-19 cases. Of these cases, 123 have fully recovered while there have been 15 deaths.

The beleaguered Balochistan province, which has admitted to lacking the capacity for aggressive testing, has thus far reported 191 confirmed cases of the coronavirus. Of these 1 has died, and there have been 30 full recoveries. 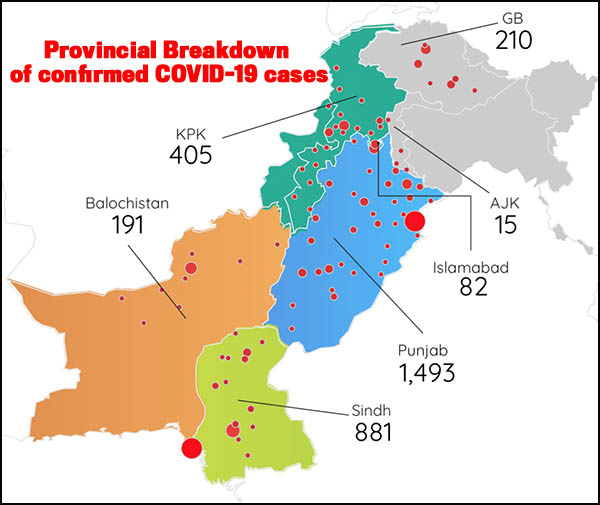 Most parts of the country remain under various restrictions—to continue until April 14. Public and private offices remain closed, apart from businesses deemed ‘essential,’ and public and private gatherings have also been banned. However, Punjab province has allowed several export-oriented industries to resume operations from April 5, raising concerns that the spiraling infections in the province could worsen as more and more people end social distancing measures earlier to return to their jobs.

Globally, the virus has now infected more than 1,272,000 people, with over 69,400 reported deaths. Governments across the world have halted flights, locked down towns and cities and urged people to stay at home. Overall, around 264,800 patients of the 1 million+ infected have recovered thus far.