As of Friday morning, 35 people have died, while 126 have fully recovered

Pakistan on Friday reported that the total number of confirmed coronavirus cases in the country had hit 2,450, with the bulk of the cases now occurring in the Punjab province.

The Disaster Management Authority in Punjab on Thursday night posted on Twitter that 11 people in the province had died due to complications caused by COVID-19 thus far. Meanwhile, 6 people have fully recovered. The largest number of cases in Punjab has been found among pilgrims returning from Iran—213—while provincial capital Lahore is not far behind with 199 cases. In Raiwind, which has been completely sealed due to fears that members of the Tablighi Jamaat will spread the virus through mosques, the number of cases had risen to 142. Overall, the province currently has 920 confirmed cases of COVID-19, just under half of the country’s overall tally.

The Sindh Health Department, also on Thursday, posted on Twitter that the province had witnessed 11 deaths from the deadly disease, 10 in Karachi and 1 in Hyderabad. The largest number of confirmed coronavirus cases has been found in provincial capital Karachi—336—while the second largest is among pilgrims returning from Iran, 273, who have been quarantined in Sukkur. Of the patients in Sindh, 65 have fully recovered thus far. According to the Health Department’s data, Sindh has thus far conducted 7,504 tests for COVID-19. It has 416 cases of local transmission and overall has 783 confirmed cases right now.

In Khyber-Pakhtunkhwa, there are a total of 311 cases, with 65 occurring among returning pilgrims from Iran. The province, according to data shared by Health Minister Taimur Jhagra, has conducted around 1,500 tests so far and has recorded 8 deaths from the deadly disease. The largest number of cases has been found in Mardan, where a patient with recent travel history had infected his entire town, while the second largest of 64 has been found in Peshawar.

In Islamabad, District Commissioner Hamza Shafqaat told private TV channel Samaa on Thursday that the federal capital had 62 confirmed cases of the coronavirus, and had conducted around 1,300 tests so far. This number had climbed to 68 by Friday morning. Of the COVID-19 patients, 2 are in critical condition he said, while 14 are admitted in hospital. The remaining patients are in home quarantine and have only exhibited mild symptoms, he added. He said no deaths from the coronavirus had been reported from Islamabad yet.

In Balochistan, a spokesperson for the provincial health department confirmed five more cases of coronavirus had been reported on Thursday, raising the province’s total to 169. 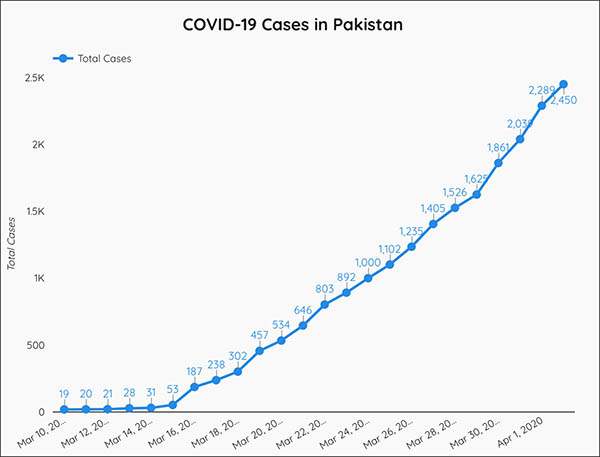 Punjab claims to have conducted over 16,000 tests for COVID-19 thus far, even though NIH data claims this is closer to the national total. The discrepancy has raised questions about the veracity of Punjab’s claims, but the provincial government claims NIH only factors in a single provincial lab and not the overall picture. Dr. Atta-ur-Rehman, chairman of P.M. Imran Khan’s Task Force on Technology Driven Knowledge Economy has said that Pakistan must aggressively ramp up testing or the situation will get much worse before it gets better.

This week, P.M. Khan announced the formation of the Corona Relief Tiger Force, a volunteer initiative designed to ensure no low-income family is left without basic necessities during lockdowns. He also announced the formation of the Prime Minister’s Relief Fund for coronavirus, a charitable sum that would offer tax incentives and be fully utilized to overcome the economic and societal impact of coronavirus. The prime minister has repeatedly come out against lockdowns, equating them to curfews, and claiming Pakistan is too poor to sustain such initiatives.

Most parts of Pakistan continue to be under lockdown despite P.M. Khan’s criticisms. Public and private offices remain closed nationwide, apart from businesses deemed ‘essential,’ and public and private gatherings have been banned to curb the spread of the novel coronavirus. Congregational prayers have also been banned across the country to limit the spread of COVID-19.

Globally, the virus has now infected more than 1,015,800 people, with over 53,200 reported deaths. Governments across the world have halted flights, locked down towns and cities and urged people to stay at home. Overall, around 208,000 patients of the 1 million+ infected have recovered thus far.