Pakistan on Monday reported 1,974 new infections of the novel coronavirus in the past 24 hours, raising its total confirmed cases to 42,125, against 11,922 recoveries and 903 deaths. Nationwide, there are 29,300 active cases of the disease.

Federal Railways Minister Sheikh Rasheed over the weekend announced the government would take a decision on whether to restore train services within this week—ahead of the upcoming Eidul Fitr break—after Punjab and Khyber-Pakhtunkhwa resumed public transport services at the urging of Prime Minister Imran Khan to “ease the suffering of the public.”

Meanwhile, the federal government on Sunday issued a notification requiring all citizens to cover their faces in public, saying anyone found violating these guidelines could be barred from entering shops, businesses or traveling outside their home.

The World Health Organization on Sunday also warned against spraying disinfectants as a preventative measures against COVID-19—a common practice across Pakistan since the initial outbreak—saying studies showed it could cause more harm then good. “Spraying or fumigation of outdoor spaces, such as streets or marketplaces, is… not recommended to kill the COVID-19 virus or other pathogens because disinfectant is inactivated by dirt and debris,” said the global health body, adding that spraying chemicals directly on people could prove physically and psychologically harmful.

Public transport services and shopping malls reopened in the country’s most populous province today (Monday), despite concerns from within the provincial government—as well as healthcare professionals—that easing lockdown restriction last week has resulted in massive violations to social distancing guidelines and could result in a spike in new infections. The province has also announced that it is preparing standard operating procedures (SOPs) for Eidul Fitr prayers against the advice of experts to discourage large congregations of people at this point in time.

Provincial capital Lahore has alone recorded 7,524 cases of coronavirus, according to the Punjab Disaster Management Authority, along with 97 deaths and 1,647 recoveries. The city currently has 5,780 active cases of the coronavirus.

In Sindh, authorities have announced that they are preparing guidelines to resume public transport in the province in line with federal government requirements, though Transport Minister Awaid Qadir Shah has clarified that this would not happen before Eid.

The total number of confirmed COVID-19 cases in Sindh on Monday morning rose to 16,377. Additionally, the province raised its casualties to 277, while its recoveries rose to 4,209. Overall, the province now has 11,891 active cases of the novel coronavirus, 9,875 of them from Karachi. 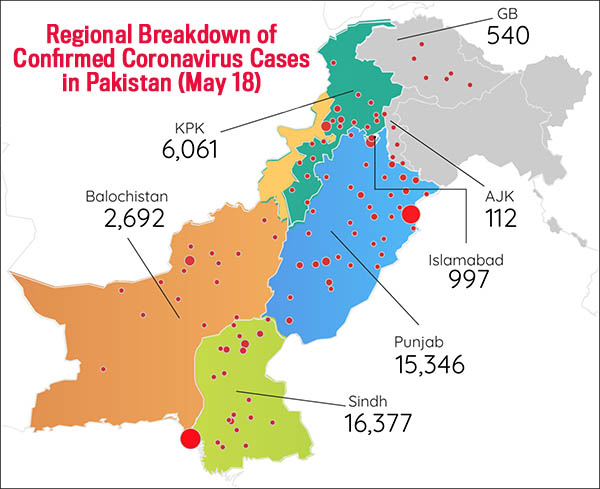 The province, which is also ruled by the Pakistan Tehreek-e-Insaf, and has followed the prime minister’s urgings to ease lockdown restrictions, has warned that the threat of infections has now increased manifold.

In a statement issued on Sunday, Chief Minister Mahmood Khan urged citizens to strictly follow social distancing rules to curb the spread of the virus, noting the restrictions had been reduced to ease the “difficulties faced by people.”

On Monday morning, authorities said the provincial death toll from the virus had now reached 318 fatalities, against 6,061 confirmed cases, with 1,783 recoveries. There are currently 3,960 active cases in the province.

The province has thus far reported 2,692 confirmed cases of the novel coronavirus, with 36 deaths and 454 recoveries. It currently has 2,202 active cases of COVID-19.

Provincial spokesman Liaquat Shahwani on Sunday said authorities had yet to decide on reopening public transport as easing restrictions for traders had resulted in a massive spike in infections due to numerous violations to the SOPs issued by the government. He said no decision would be taken if it risked overwhelming the province’s healthcare infrastructure.

Islamabad on Monday raised its confirmed COVID-19 infections to 997, with 7 deaths and 113 recoveries. Presently, the Islamabad Capital Territory has 877 active cases of the novel coronavirus.

In Gilgit-Baltistan, cases of the novel coronavirus rose to 540, with no new deaths and 23 new recoveries. Overall, it now has 4 deaths and 368 recoveries, leaving 168 active cases.

In Pakistan-administered Kashmir, the total number of confirmed cases has increased to 112. The region has recorded no new deaths and 1 recovery in the past 24 hours, leaving it with 1 death total and 77 recoveries. There are currently 34 active cases of the virus in the disputed region.

The government of Azad Jammu and Kashmir on Sunday announced it was withdrawing all relaxations in lockdown measures from Tuesday due to a “dangerous” surge in the number of COVID-19 cases in the territory.

Globally, the virus has now infected more than 4,804,765 people, with over 316,711 reported deaths. Governments across the world have halted flights, locked down towns and cities and urged people to stay at home, but there are signs of easements to help shuttered economies recover. Overall, around 1,858,783 patients of the 4.8 million+ infected have recovered thus far.