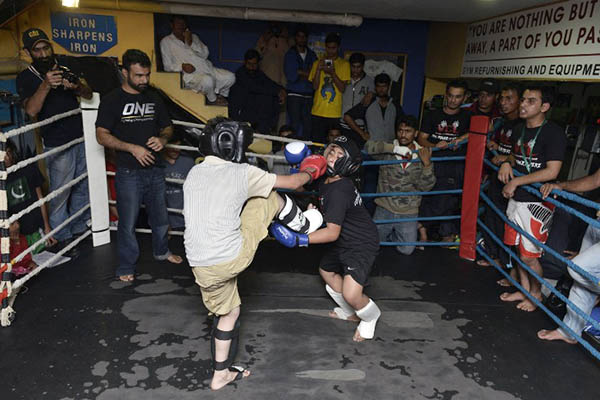 Bashir Ahmad, the first Pakistani MMA fighter on global stage, hopes to bring the sport into the public eye.

In a dingy gym tucked away in a basement in Lahore, pumped up teens get to grips with jujitsu moves before unleashing volleys of ferocious punches. Some dream of following in the footsteps of Bruce Lee and Muhammad Ali, but others idolize the gym’s owner Bashir Ahmad, the first Pakistani mixed martial arts (MMA) fighter on the world stage.

With its exciting blend of wrestling and boxing, MMA is fast becoming a worldwide phenomenon. Events attract thousands of spectators and millions more tune in to watch their muscled heroes battle it out on TV or over live Internet streams. In Pakistan there are around 500 diehard fighters that practice this extreme sport, which stands in marked contrast to the country’s more sedate pastimes like cricket, with its breaks for afternoon tea.

Today Bashir watches as youths—some lean and sinewy, others muscular—trade blows as onlookers scream: “We want blood! We want blood!”

Dawood Shahid, who at 12 years old already packs a mean uppercut, says he used to watch American WWE wrestling on TV for many years before switching over to MMA. “WWE is made up, MMA is the real thing,” he says after his friendly bout.

In Pakistan, MMA is growing under the watchful eyes of a close-knit circle that surrounds Bashir. Short but tough and built like an ox, the Pakistani-American former soldier served with the U.S. Army in Iraq before devoting himself to martial arts, taking an MMA course in Thailand where he took part in his first amateur bouts under the name “Somchai,” meaning “man” in Thai.

In 2009, the 32-year-old returned to Pakistan, opened his own gym and began to organize “extreme combat” in metal cages, sowing the seeds of an underground scene. Last year the Asian championship ONE, the MMA’s de facto second division behind the U.S. Ultimate Fighting Championship with its millionaire stars like Canadian George St-Pierre, approached Bashir for a fight in Singapore, which he won. Pakistan had found its first MMA victor.

That success energized young fans of the sport in Pakistan but had relatively little impact on the rest of the country, which remains in love with cricket and to a lesser extent traditional wrestling. But unlike Brad Pitt in the cult hit Fight Club, whose first rule was never to speak of Fight Club, MMA adherents are trying hard to emerge from the shadows.

“Last year, I kept on traveling to different TV channels to say ‘Hey I have a good idea, I have good fighters, I have a ring, I have this and that, the whole team, why we don’t put a show on?’ But they replied ‘What is it? Is it cricket?’” said Sheikh Sultan Shahid, an MMA promoter.

In Bashir Ahmad’s gym, youths from rundown neighborhoods square up to others from a posh suburb of Lahore who pay $50 a month for training, bringing together two different worlds in this highly class-oriented society. The son of a cleric from a poor family, Abdul Rafique, 19, gets a $10 a week stipend from the proprietor of a gym, who sees in him the making of a future warrior.

“I come from a poor family and I joined it because I am studying as a sportsman and getting a scholarship and also being trained for MMA. I really like MMA, I want to fight with all my heart and soul,” said Rafique.

Apprentice fighters have limited exposure to martial arts and are taught to avoid hitting the face, which is considered forbidden in certain sects of Islam—though it doesn’t prevent the neighborhood mullah from praying for the fighters’ protection. And though some dream of the octagonal cages of Asia and America, the more well off fighters are more reluctant to think of the sport in professional terms.

Harris Butt, a medical student with rock solid biceps and abs, recently got his first offer to fight abroad, but his mother didn’t allow him. After all, she said, better to be a doctor than a patient after a fight.

Pakistan has battled an Islamist insurgency for more than a decade, and its stuttering economy is plagued by power blackouts, joblessness and high poverty—frustrations that may create the breeding ground in which combat sports like MMA could thrive one day. For now, this Fight Club remains confined to a handful of poor fighters and some who can afford to pay up to $100 a month in a smattering of gyms.

Mohammad Abdullah, a young MMA convert, is in no doubt about what is holding it back. “If MMA moves into the open in Pakistan, you will see what good fighters we are.”