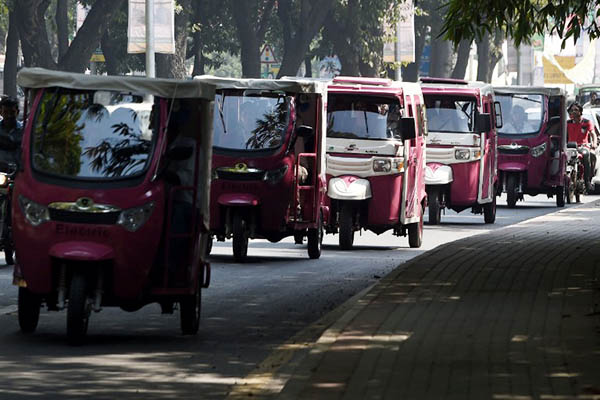 The streets of Lahore were tickled pink on Saturday, when a group of women staged a rose-colored “rickshaw rally” for female empowerment.

Driven by female representatives from local social groups and charities, the bright pink, covered three-wheeled motorcycles zipped through the city in a bid to highlight the challenges faced by Pakistani women.

The project is the brainchild of Zar Aslam, president of non-profit Environment Protection Fund (EPF), who launched the service exclusively for women after years of being harassed by male rickshaw drivers. “We started this Pink Rickshaw initiative to empower women,” she said after leading the rally from an upmarket residential complex to the city’s main Quaid-e-Azam library. “What we are doing is we are trying to help women become entrepreneurs and operators and owners of their own rickshaws.”

Pakistan’s conservative culture means women still face many social taboos in their daily life—including in everything from their dress to the kind of jobs they can do. While times are gradually changing, it is still rare to see a woman driving a rickshaw or taxi, but drivers in Saturday’s rally said they hope to change that.

“It will definitely make a big difference and that’s the point,” said driver Mina Malik-Hussain. “There has to be an opportunity and this scheme is creating opportunity for women. It’s not going to solve the problem entirely, but it’s a very big step forward.”