Pakistan on Wednesday reported 2,299 new recoveries among patients of the novel coronavirus, raising to 100,802 the people who have fully recovered from the deadly virus nationwide. This country’s recovered are now almost a full 50 percent of its total cases.

The country continues to test far below its claimed capacity of 71,780—and significantly below the numbers proposed by global health experts—having only conducted 22,418 tests in the past 24 hours, a positivity ratio of 18.4 percent. According to the World Health Organization, any country with a positivity ratio over 5 percent is likely only testing the most symptomatic patients and ignoring asymptomatic infections, which can significantly boost the spread of the virus.

The provincial health secretary announced on Tuesday that it was extending its ongoing lockdown restrictions until July 15. Under these measures, educational institutions, wedding halls, restaurants, parks and cinema halls would remain closed, while all large public gatherings also remain banned.

On Wednesday, authorities reported 35 new deaths due to COVID-19, raising total fatalities to 1,762. The province also reported 761 new infections, raising confirmed cases to 76,262, against 27,488 recoveries. There are now 47,012 active cases of the virus in Punjab province.

Sindh Chief Minister Murad Ali Shah on Tuesday announced that the province’s recovery rate had increased to 55 percent, adding that the fatality rate was 1.6 percent. “We are trying to control the death rate by diagnosing patients in time and [starting] their treatment,” he said in his daily press briefing.

Adviser to the C.M. on Information Ajmal Wazir on Tuesday said the 276 areas of seven divisions in the province were under “smart lockdown” to curb the spread of COVID-19. He said the locked down areas had 2,895 people infected with coronavirus, adding that 3,141 houses with 808,627 residents were currently isolated.

The provincial government on Wednesday reported 16 new deaths, raising its death toll to 951. In the past 24 hours, its recoveries rose by 441 to 13,067, while its confirmed cases have increased by 483 to 26,598. There are currently 13,067 active cases of coronavirus in the province. 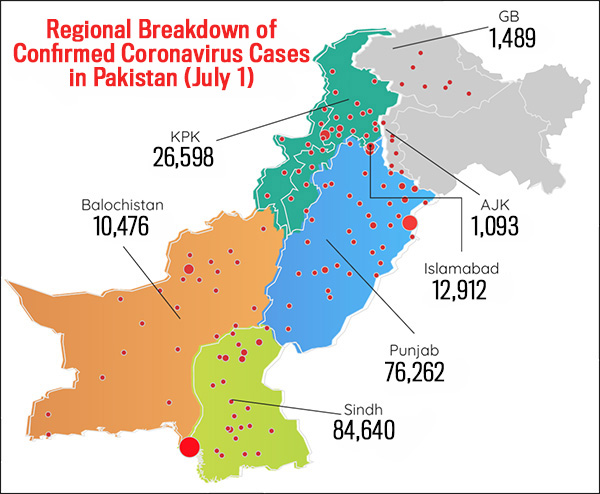 The provincial government on Tuesday extended its ongoing lockdown restrictions till July 15, with a notification issued by the Home Department saying coronavirus remained a threat and preventative measures were necessary to curb its spread. Under the extended restrictions, large public gatherings are banned and face masks are mandatory in public spaces.

Confirmed cases of the novel coronavirus in the province on Wednesday rose by 50 to 10,476, with 2 new deaths raising total fatalities to 121. Overall, 4,484 patients have fully recovered from the virus, leaving 5,871 active cases of COVID-19, 239 less than a day ago.

Islamabad on Wednesday raised its confirmed coronavirus cases by 137 to 12,912. There were no new deaths in the past 24 hours, while 45 people fully recovered. Overall, 128 have died due to COVID-19 in the federal capital against 7,261 recoveries, leaving 5,523 active cases of COVID-19.

Confirmed cases of the novel coronavirus in Gilgit-Baltistan rose by 19 on Wednesday to 1,489. The region reported 2 new deaths, raising fatalities to 26, while there have been 1,128 full recoveries, leaving 335 active cases.

In Pakistan-administered Kashmir, confirmed cases have increased by 28 to 1,093. The region’s death toll increased by 2 to 30, while 550 people have fully recovered. It has 513 active cases of COVID-19.

Globally, the virus has now infected more than 10,586,590 people, with over 513,929 reported deaths. Governments across the world halted flights, locked down towns and cities and urged people to stay at home at the peak of the virus’s spread, but there are now signs of easements in nations that have reined it in to help shuttered economies recover. Overall, around 5,795,970 patients of the 10.5 million+ infected have recovered thus far.