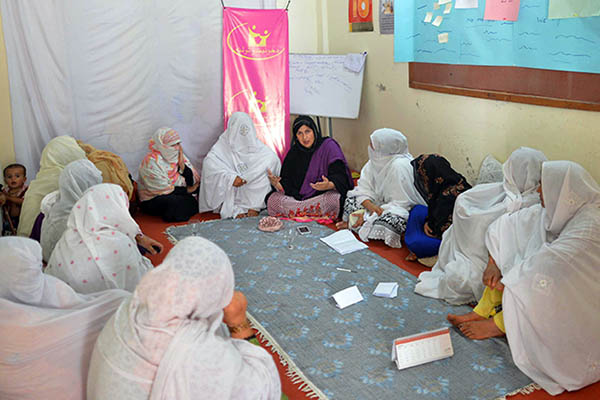 When 16-year-old Tahira was murdered in a horrific acid attack last year, her poverty-stricken parents were unable to get any justice. Officials slammed the door in their faces and police refused to listen. The prime suspect—the girl’s abusive husband—lived in freedom until the case was taken up by Pakistan’s first female jirga, a community assembly set up to win justice for women in the face of immense discrimination.

In recent years, the Swat valley has become synonymous with abysmal women’s rights. It was here that the Taliban shot schoolgirl activist Malala Yousafzai in the head last year for advocating women’s education. When the Taliban controlled Swat from 2007 to 2009, girls were barred from going to school, their classrooms were burnt, and women prevented from leaving the house without a male relative.

Government writ was restored in 2009, but like much of the northwest, ancient mores and conservatism too often make women second-class citizens whose needs are subservient to those of men.

Each time Tahira’s mother, Jan Bano, climbs the steep hillside to her daughter’s grave and down again, she feels dizzy and weak. She has high blood pressure and diabetes, and the stress of failing to get justice makes her condition worse.

Tahira was married off at 12, as is the custom in many tribal communities where girls from poor families are given to their husbands at puberty. But her mother says she became concerned when her son-in-law, Subha Khan, started to beat and torture her daughter. It was he who poured acid on her and dumped her in a room to die, her mother claims.

Tahira’s face was destroyed. So was her upper body. She screamed in agony for 14 days before she passed away, Bano said. But when they went to the police, officers did nothing.

When her eldest son approached government officials to complain, Khan and his father threatened him with dire consequences. Then they were sent a message by the local jirga, a group of male tribal elders that functions as a decision-making council in Pakhtun society, advising them to marry one of their sons to one of Khan’s sisters by way of recompense for Tahira.

Bano refused to do so and was still fuming when she heard that a group of female activists had set up a women-only jirga in Saidu Sharif.

“We’re fed up with male-only jirgas which decide only in favor of men and sacrifice women for their own mistakes,” said Tabbassum Adnan, 35, head of the 25-member jirga. “We simply can’t leave women at the mercy of the male jirgas,” she said at the jirga’s small office.

Adnan raised Bano’s case and organized protests demanding legal action against Tahira’s husband. Her efforts persuaded police to register a case against Khan but he has since gone on the run. Adnan has provided Bano with a lawyer to fight her daughter’s case.

Dissatisfaction with mainstream justice is common in Pakistan, where it can take years to process a case through the courts. Taliban insurgents were emboldened by complaints that the courts were too corrupt and too slow, and tribal jirgas present the most viable alternative. But they typically ignore or discriminate against women’s rights. Women are often sold in marriage to seek forgiveness for men’s crimes, their fates decided without consultation.

Adnan says she first asked to join the main Swat Qaumi Aman Jirga to ensure justice for women, but they refused. “So, we have formed our own jirga now and we will decide cases involving women,” she said, wearing a traditional black burqa. “Our only aim is to provide legal support to women, which we are doing by involving police and government authorities,” she added.

Adnan, who divorced her husband after 20 years of what she called a troubled marriage, said her jirga is called Khwaindo Tolana, which means “sisters’ group.” It was born out of the result of a women’s empowerment program run by a local aid group. “The tremendous response by women motivated us to organize a separate jirga to fight for their rights,” Adnan said. She claims to have helped 11 women get justice so far.

But the response from the men’s jirga has been lukewarm at best.

Ahmed Shah, a spokesman for Swat Qaumi Aman Jirga, confirmed that the women had tried to approach them asking to join, but he said this was “impossible” in Pakhtun society. In private, many members of the male jirga dismiss the women’s effort as ridiculous.

The conviction rate is also so weak in Pakistan that it may limit the jirga’s influence if its decisions are not enforced. But for Saima Anwar, who claims to be the first female lawyer to have practiced in Swat, it is a vital first step. “This jirga is a good effort. It will provide women a platform and help them win their rights without fear or the interference of men,” she said.