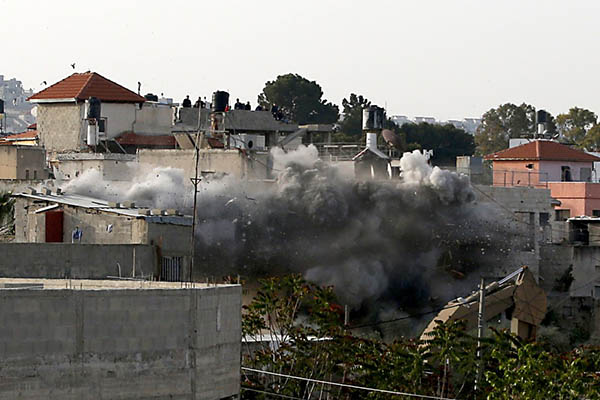 Gazan authorities reported a pregnant Palestinian mother and her one-year-old daughter killed in an Israeli strike on Saturday, but an Israeli army spokesman challenged the Palestinian account of the incident.

The Gazan health ministry said in a statement Falestine Abu Arar, 37, died from the “Israeli targeting east of Gaza.” It had earlier announced the death of her 14-month-old daughter in the same incident as Israel carried out strikes in response to some 250 rockets fired from Gaza.

The Israeli army’s Arabic-language spokesman on Twitter questioned the claim and suggested Palestinian fire may have been to blame, but did not provide details on what he believe occurred. “According to indications the baby and her mother died as a result of the terrorist activities of Palestinian saboteurs and not as a result of an Israeli strike,” Avichay Adraee said.

He added that pictures from the day “clearly show the launching of rockets from crowded areas.”

The incident took place in the Zeitoun neighborhood in eastern Gaza City.

An AFP journalist at the scene saw significant damage to a building.

Neighbors said an area outside had been hit by an Israeli strike.

Two other Palestinians were also killed in the Israeli strikes on Saturday, according to the ministry, bringing the death toll to four.

In Israel, one woman was seriously injured in a rocket strike on the city of Kiryat Gat, some 20 kilometers from the Gaza border, police said. Israeli police said a man was also hospitalized in the city of Ashkelon and spoke of other injuries without providing details.

Medics said the woman was 80 and the man 50. A house near Ashkelon was damaged while other rockets hit open areas.