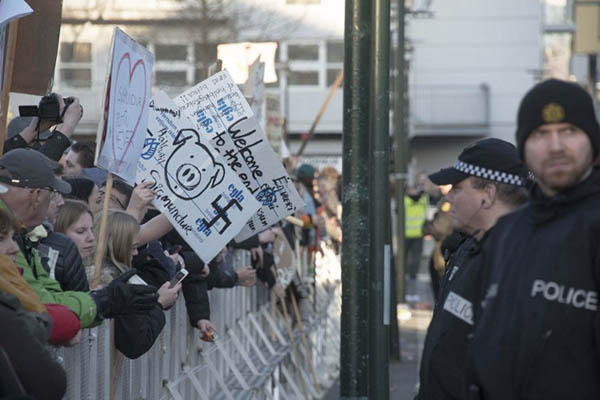 Politicians, celebrities under scrutiny for potentially evading taxes by parking their money in offshore companies.

Several countries have launched tax evasion probes after a massive leak of confidential documents lifted the lid on the murky offshore financial dealings of a slew of politicians and celebrities.

The scandal erupted on Sunday when media groups began revealing the results of a yearlong investigation into a trove of 11.5 million documents from the Panamanian law firm Mossack Fonseca, which specializes in creating offshore shell companies.

In Iceland’s capital Reykjavik, thousands took to the streets late Monday to demand the premier resign over allegations that he and his wife used an offshore firm to hide millions of dollars of investments.

Australia has already launched a probe into 800 wealthy Mossack Fonseca clients. France and the Netherlands also announced investigations, while a judicial source said Spain had opened a money-laundering investigation into the law firm.

Panama also pledged to launch an investigation to identify if any crimes have been committed and any financial damages should be awarded. President Juan Carlos Varela said Panama would cooperate with the international probes but also vowed to “defend the image of our country,” which has a reputation as a hub for under-the-table dealings.

Messi’s family was swift to dismiss any suggestion he had been involved in shady activity, saying “accusations he created a… tax evasion plot, including a network of money laundering, are false and insulting.” Messi has been charged with tax fraud in a separate case that is due to go to trial in Spain in May.

Offshore financial dealings are not illegal in themselves but may be used to hide assets from tax authorities, launder the proceeds of criminal activities or conceal misappropriated or politically inconvenient wealth. The trove of documents was anonymously leaked to German daily Sueddeutsche Zeitung and shared with more than 100 media groups by the International Consortium of Investigative Journalists (ICIJ). More information is expected over the coming weeks.

The first revelations elicited a chorus of denials, including from the Kremlin, which suggested a U.S. plot after the leaks put a close friend of Putin’s at the top of an offshore empire worth more than $2 billion.

“Putin, Russia, our country, our stability and the upcoming elections are the main target, specifically to destabilize the situation,” said a Kremlin spokesman, claiming the journalists were former officers from the U.S. state department, the CIA and special services.

Among other key allegations of the probe, which named about 140 political figures, including 12 current or former heads of state:

The families of some of China’s top brass, including President Xi, used offshore tax havens to conceal their fortunes, including at least eight current or former members of the ruling Communist Party’s most powerful body.

Iceland’s prime minister secretly owned millions of dollars in bank bonds at a time when his country’s banking system was collapsing in 2008. He has so far refused to step down.

Argentina’s President Mauricio Macri, his father and brother were reportedly registered as directors of an offshore company in the Bahamas. Macri said “there was nothing strange about the operation” and it was declared to the tax authorities.

A member of FIFA’s ethics committee, Juan Pedro Damiani, had business ties with three men indicted in a corruption scandal.

A Panamanian shell company may have helped hide millions of dollars from a $40 million British gold bullion robbery at London-Heathrow Airport in 1983 that is etched in criminal folklore.

The papers, from around 214,000 offshore entities covering almost 40 years, also name the president of Ukraine and the king of Saudi Arabia. Ukrainian President Petro Poroshenko denied any wrongdoing, but he may face an attempt to impeach him.

“Switzerland is really making progress, so there is a concentration of problems in Panama,” he told AFP, referring to another popular offshore tax haven.

One of the Panama law firm’s founders, Ramon Fonseca, told AFP the leaks were “a crime, a felony” and “an attack on Panama.”

More than 500 banks, their subsidiaries and branches have worked with Mossack Fonseca since the 1970s to help clients manage offshore companies. UBS set up more than 1,100 and HSBC and its affiliates created more than 2,300. The documents show “banks, law firms and other offshore players often fail to follow legal requirements to make sure clients are not involved in criminal enterprises, tax dodging or political corruption,” the ICIJ said.

Mossack Fonseca is already subject to investigations in Germany and Brazil, where it is part of a huge money laundering probe that has threatened to topple the current government.