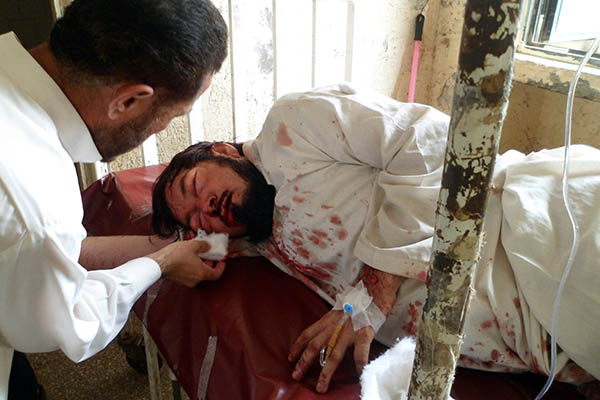 At least 43 killed, over 200 injured in suicide attacks claimed by the Ansar-ul-Mujahideen.

Twin suicide attacks rocked a busy marketplace in northwest Pakistan on Friday, killing at least 43 people and injuring more than 200 others, officials said, in the deadliest attack to hit the country during the holy month of Ramzan.

The explosions at the bazaar in Parachinar, the main town of Kurram tribal district on the Pakistan-Afghanistan border, sent handcarts flying as shoppers bought food to open their fasts at sunset.

“We can confirm the death of 41 people in the twin blasts. More than 150 others have been injured in the attack,” said Dr. Sabir Hussein, head of the main public hospital in the town. “We have sent 20 critically wounded people to major hospitals in Peshawar and Kohat to save their lives,” he added.

“There were two blasts in the main bazaar of Parachinar. These were carried out by two suicide bombers who walked into the crowded market,” said Riaz Mehsud, a senior administration official. He said the Shia community had been targeted and two children were among the deceased. “At least 43 people have been killed while more than 200 were injured.”

Mehsud said the market was packed with people and that handcarts were sent flying after the blasts, which also damaged up to 15 shops and two cars. “We found many body parts, including parts of the suicide bombers. There was blood and human flesh at the blasts site,” he said.

The bombers struck in a largely Shia Muslim area but officials said they could not immediately identify all the victims. “Many bodies can’t be identified because they have been mutilated very badly,” said Salahuddin, a health technician at the hospital. He said lists of the dead and injured were still being drafted, adding, “I fear that the number of the dead and wounded people from this attack may rise.”

A spokesman for the splinter Taliban group, Ansar-ul-Mujahideen, claimed responsibility for the attack. A spokesman for the group, Abu Baseer, said: “It was carried out by their mujahedeen and the target was the Shia community. Shias are the enemies of Islam and we will continue to attack them in future.”

Ansar-ul-Mujahideen is a banned organization based in the Waziristan agencies. The militant organization has targeted security forces in the past.

In March it conducted a suicide attack on the Esha checkpost in North Waziristan, killing more than 20 security forces officials and injuring dozens more. The picket was destroyed completely. Subsequently in June, it staged a suicide attack at a security checkpoint on the Miranshah-Razmak Road in Dosaali tehsil.

Kurram is frequently the scene of sectarian violence between Pakistan’s Sunni and Shia sects. Shias account for 20 percent of the 180 million population in the nuclear-armed state.