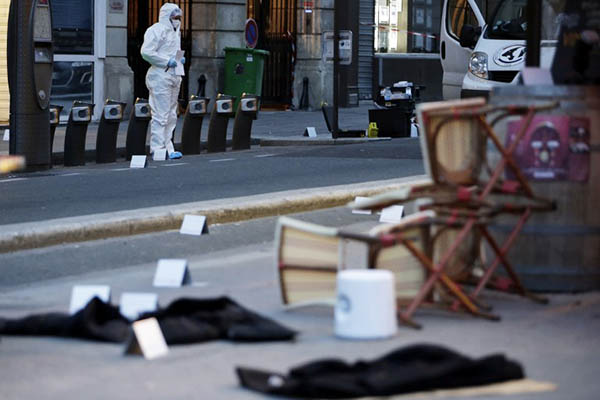 At least 128 dead and 180 others injured, with police saying 80 people are in critical condition.

At least 128 people were killed in the Paris attacks on Friday night, with 180 people injured, 80 of them critically, police sources told AFP.

At least eight militants, all wearing suicide vests, wrought unprecedented violence on the streets of the French capital, in the bloodiest attacks in Europe since the Madrid train bombings in 2004.

The attackers, who witnesses say claimed they were retaliating France’s military intervention in Syria, massacred diners and concertgoers and launched suicide attacks outside the national stadium. French P.M. Francois Hollande was at the stadium at the time of the attack and had to be hastily evacuated.

France has been on high alert since the attacks in January against Charlie Hebdo and a Jewish supermarket that left 17 dead. Security had begun to be stepped up ahead of key U.N. climate talks to be held just outside the French capital from Nov. 30, with border checks restored from Friday.

More than 500 French fighters are thought to be with Islamic State in Syria and Iraq, according to official figures, while 250 have returned and some 750 expressed a desire to go. France has joined U.S.-led airstrikes on I.S. targets in Iraq for over a year and in September began bombing the jihadists in Syria.