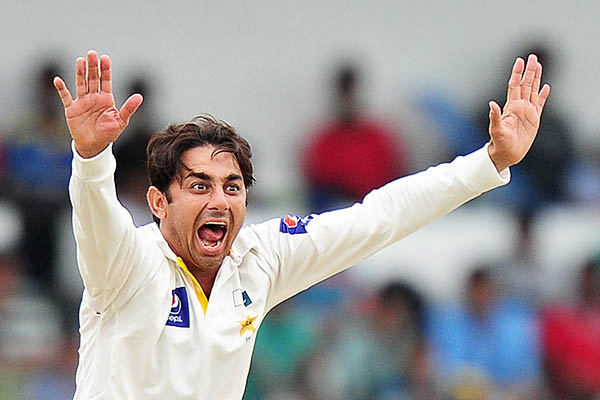 Saeed Ajmal was suspended from bowling in international matches in September.

Pakistan cricket chiefs said on Tuesday they are seeking a reassessment of Saeed Ajmal’s bowling action, which was deemed illegal in September, in a bid to clear the star off-spinner before next year’s World Cup.

Ajmal was suspended from bowling at international level after a biomechanical analysis of his action, which was reported as suspect during the Galle Test against Sri Lanka in August. After placing him in a corrective program, the Pakistan Cricket Board (PCB) said it was ready to have his action re-tested by the International Cricket Council (ICC).

“We have sent an email to the ICC for Ajmal’s official bowling reassessment and are waiting for a date,” it said in a statement.

Ajmal’s suspension had disrupted Pakistan’s planning for the World Cup in Australia and New Zealand in February-March, since Ajmal has been their main wicket-taker. He has 178 Test, 183 one-day and 85 Twenty20 wickets.

But even without Ajmal, Pakistan won 2-0 in a Test series against Australia—their first win over the opponents in 20 years—as left-arm spinner Zulfiqar Babar and leg spinner Yasir Shah came to the fore. Pakistan also later drew their Test series with New Zealand 1-1.

Under the ICC rules bowlers are allowed to extend their elbow by 15 degrees, beyond which an action is deemed illegal. Ajmal’s assessment in Australia showed his extension was nearly 43 degrees.

PCB Chairman Shaharyar Khan said the player was now confident of passing the test. “Ajmal called me from London after his unofficial tests and showed confidence that he will get cleared,” said Khan, adding he hoped the test would take place within 10 days.

Under the ICC rules a suspended bowler’s remodeled action will be compared with the action employed in the match in which he was reported. If the re-assessment concludes that the action is no longer illegal, his suspension shall be lifted and he shall be allowed to bowl at international level instantly. But if the cleared bowler is found again in breach of the legal limit inside two years of the first report, he risks a one-year ban.

Sri Lanka’s off-spinner Sachitra Senanayake, suspended in July this year, had his action reassessed last week. Besides Ajmal and Senanayake, New Zealand’s Kane Williamson, Zimbabwe’s Prosper Usteya and Bangladesh’s Sohag Gazi were also suspended as part of a major crackdown on so-called chuckers by the ICC in June this year. Pakistan’s Mohammad Hafeez was also reported and had his biomechanical test last month.