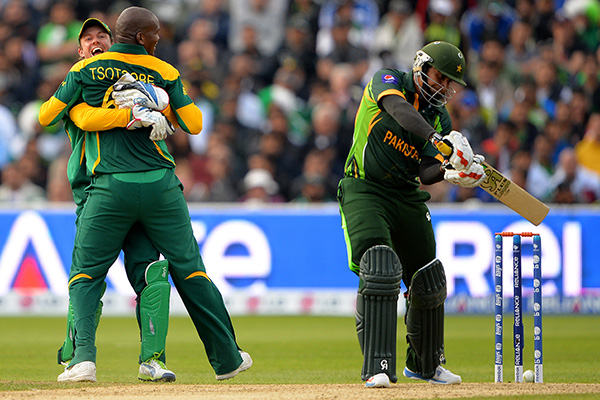 Former cricketers and fans have lamented Pakistan’s woeful batting performance in their Champions Trophy defeat to South Africa, which left them on the brink of crashing out of the tournament.

Pakistan were bowled out for 167 in their crucial clash at Birmingham’s Edgbaston ground, chasing a modest 234 against a weakened South African bowling attack, missing the injured Dale Steyn and Morne Morkel.

Pakistan’s chances of reaching the semifinal now hang by a thread. They must beat archrivals India in their last group game on Saturday and hope other results go their way.

According to former captain Zaheer Abbas, the side’s failings with the bat were all too familiar. He urged the Pakistan Cricket Board to come up with a proper strategy to address the problem. He also said the batsmen looked nervous both against South Africa and in the first game against the West Indies, when they were skittled out for 170 inside their 50 overs.

“I don’t know why our batsmen were in awe of the West Indian and South African bowlers, why fear set in is unfathomable,” said Abbas, once dubbed the “Asian Bradman” for his prowess at the crease. “Our batsmen play Tests like one-day and one-day like Tests,” said Abbas. “We have to change the attitude of our batsmen and for that we need to have a good and able batting coach. Batsmen get out but they should be taught to fight.”

Former spinner Tauseef Ahmed said the batsmen lacked guts. “We are now used to of defeats, used to batting failures because this has been going on for quite some time now,” said Ahmed. “Batsmen not performing at international level is disappointing.”

Fans on the street were also left shattered. “Our batsmen let us down, but this has been going on,” said Saqib Murad, a student in Karachi. “We must do something otherwise people will lose interest in the game.”