Home Culture Portrait of the Photojournalist

Portrait of the Photojournalist 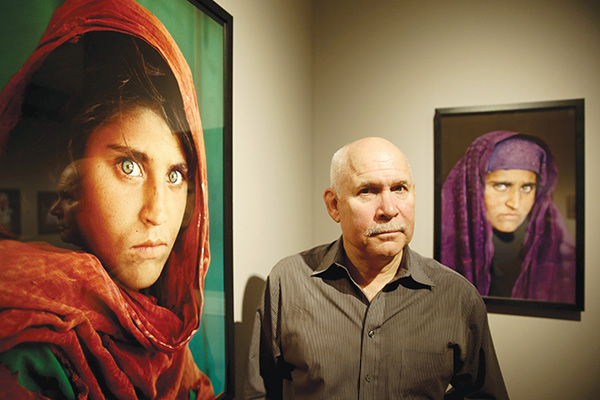 Behind the haunting images of Steve McCurry.

“I’ve never been interested in accumulating stamps in my passport,” says Steve McCurry, who nonetheless has gone through many little blue books during his decades as a photojournalist traveling up, down, and around six continents. Work has carried him from the temples of Angkor to refugee settlements at the Afghanistan-Pakistan border to India, where he tracked a monsoon—the “gift of the gods.” Everyone knows his most famous photo—the haunting green eyes of Afghan Girl, which made National Geographic’s cover in 1985 and gave a face to the Soviet occupation in Afghanistan—yet it’s only one image in a career that has spanned the globe.

“I have never thought of my pictures in terms of covers,” says McCurry, who’s a recipient of the Robert Capa Gold Medal. “I look for pictures that tell a story of what it is like to be that person in that place at that time,” he says.

McCurry, 63, is one of an increasingly rare breed. He’s still sent to some of the most dangerous and newsworthy locations in the world to capture a particular moment in time. An engrossing new book about his career, Steve McCurry Untold: The Stories Behind the Photographs (Phaidon Press, 2013), contains photo series, essays, journals, and assignment letters from Time, National Geographic, and even one from Newsweek granting permission to shoot a story about refugees in Pakistan. Now magazines and newspapers are more likely to cut their photo staffs than to groom the next generation of McCurrys. But, as McCurry says, a photographer’s duty is to adapt to a changing landscape.

Here, he allows the attention to turn to a rare subject: himself. McCurry shares with Newsweek his thoughts on the ubiquity of iPhone photography, his advice for photojournalists of the future, and some of the most haunting images he’s ever seen. Excerpts from our interview:

You found and photographed Sharbat Gula, the subject of your Afghan Girl photo, 17 years after she was on the cover of National Geographic. Would you ever shoot her again?

Over the years, we have supported Sharbat and her family and have tried to provide her with her needs and wants. If the opportunity presented itself, I would photograph her again, but the important thing is that she is able to live in comfort and peace with her family.

What did you learn from shooting the Afghan conflict that has remained with you?

As hard as superpowers have attempted to subdue and recreate the country in their own image, Afghanistan has been able to absorb the blows and remain essentially the same. The Soviets left after 10 years, and the United States will be leaving after fighting the nation’s longest war.

What essentials do you bring when you travel?

I have a minimalist approach toward traveling. Apart from my clothes, a couple of hats, a good pair of walking shoes, vitamins, and a couple of books, I don’t need much. I take extra cables for my laptop, cellphone, and camera charger. Other than that, my camera and one or two lenses are all I need.

Whose work inspires you?

I think Henri Cartier-Bresson’s pictures provide wonderful insights into people and their stories. Many of his pictures are journalistic, but they transcend journalism for me and work on a lot of different levels. They’re timeless.

What has been your most memorable assignment for our newsmagazine, Newsweek?

I worked with the legendary Edward Behr in 1980, when we were covering the Afghan-Pakistan border. He has been called the consummate professional, and I can attest to his courage, humor, and intelligence. Ed had been stationed in Peshawar, Pakistan, in 1947, during his service in the British Army. He was one of the preeminent foreign correspondents of his time. We became close friends, and I visited him at his home in France whenever I could.

Does working for up to 12 months on a project (as you did with your 1983 Monsoon series) seem like a luxury now?

Certainly when you have the time to really dig deep into a story, it is a great opportunity to explore every aspect of a topic and potentially find some interesting angles to include in the story. The same can be said for continuing to return to the same places over the span of many years. I find myself returning time and time again to a few places that I’ve discovered a real resonance with: Afghanistan, Burma, Tibet, India. No matter how many times or how often I return, these places change, but the essential elements stay the same.

In May the Chicago Sun-Times laid off its entire photo department and decided to use only wire photos to save money. Do you fear for the future of professional photographers?

People feel comfortable with the status quo and often struggle to adapt to change. The industry is changing, and that’s not necessarily a bad thing or a good thing. While some options once available to photographers are no longer there, there are also some wonderful new ways to get your work seen, which we couldn’t have dreamed of 10 or 20 years ago. We may be on the brink of great opportunities we can’t even imagine now. It’s our challenge as photographers to stay flexible and adapt with the times. There has always been a need for news and storytelling, and although the landscape has changed, the basics remain the same.

Do you consider using iPhones, Instagram or Photoshop as cheating?

The medium or technology—Instagram, digital or film, or what camera you use—is not important. A successful photograph has to be about telling stories, being creative, having your own interpretation and your own voice to say what is important to you, and to convey that through your photographs. These are just tools, so if the photograph speaks to you, that’s all that’s important in the end.

Any advice for aspiring photojournalists?

Photograph things that are interesting to you. Photography is like other disciplines: architecture, medicine, music. They all require patience, discipline, hard work, and practice.

Which country have you found on your travels to have been most affected by globalization?

I have visited India more than any other country, and since my first visit in 1978 I have seen India’s economic and social transformation. It’s now one of the world’s fastest-growing economies and a world leader in technology. The most daunting challenge will be to educate India’s youth. More than half of India’s children do not complete primary schools.

On September 11, you shot the Twin Towers coming down from your rooftop. What is your most striking memory of that day?

Everything was covered in this white ash. And it was very fine, almost like confectioners’ sugar. It was everywhere. The other thing that was really striking was that there was office paper everywhere. It was almost like a late-fall day, when leaves are everywhere. I was ready to go through and see if it was anything important and try to send it back to people. It was a funny kind of instinct. Right across the street from Ground Zero, there was a deli. It was totally evacuated, but all the sandwiches were laid out on the counter where they had been making lunch. It reminded me of Pompeii. There weren’t any people at Ground Zero, but all the stuff that they had been doing was just frozen in time.

Do you think photographers need to leave their own countries and travel widely to do their most important work?

Successful photography is about embracing your spirit of curiosity and exploring subjects that you have a strong interest in—and that can be anywhere. You can go a thousand miles from home, or you can go a thousand miles deep within your own community. Bill Owens did a book about suburbia. Bruce Davidson did a lot of work in his home neighborhoods in New York. Sally Mann photographed her family and subjects close to home.

What have you seen that’s profoundly affected you?

There was a situation that haunts me to this day. I was in an asylum in Kabul in 1992, and there were some inmates in the courtyard. One man had chains around his legs that were medieval. After photographing him and wandering off to another part of the courtyard, I looked back, and he had a stone that he was using to bash another inmate’s head in. I remember seeing that stone bouncing off the man’s head. We wrestled him to the ground and took the wounded man to the hospital. That was an awful experience.

What advice do you turn to while working?

I am most influenced by my father’s work ethic. He never gave up, never stopped until he finished a task, and never stopped learning.

From Popcorn to Planes